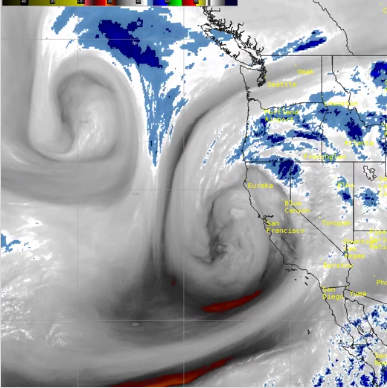 At Lake Cuyamaca, over 2.8 inches of rain fell. Mesa Grande and Pine Hills got approximately  2.5 inches. Ramona, Julian, Descanso and Santee got between two and 2.5 inches of rain.  La Mesa and Alpine received just under two inches. Out in the desert, San Felipe got over an inch of much-needed rain, while Borrego Springs had about half an inch.

The rain caused flooding in some areas, shutting down Highway 94 from Honey Springs Road to the Jamul Casino for several hours, with three feet of water washing over a dip in the highway, according to the California Highway Patrol website.

In San Diego, strong winds blew a tree down in Balboa Park, crushing several cars in a parking lot.  The storm also caused flooding in Mission Valley and dumped nearly three inches of rainfall in Oceanside. Wind speeds up to 68 miles per hour were measured on Palomar Mountain, with some 50 mile an hour gusts clocked in East County’s mountain areas.

Elsewhere in Southern California, ski areas report substantial snow including 8 to 10 inches at Mountain High, 6 to 8 inches at Snow Valley, and 3 to 5 inches of snow at Big Bear.

Looking ahead, the National Weather Service forecasts a 70% chance of rain during the early part of this week, with sunny skies Friday and a chance of more rain next weekend.