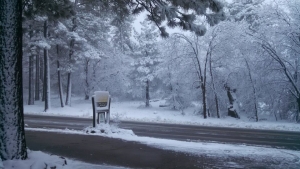 March 3, 2015 (San Diego’s East County)--A storm that swept into our region over the weekend dropped over 8 inches of snow on Mt. Laguna and more than a foot on Palomar Mountain.

The region also received much needed heavy rains, with more than two inches at Descanso, Julian and Lake Cuyamaca by late Monday. At the Department of Motor Vehicles in El Cajon, hailstones blanketed the parking lot.

That caused headaches for motorists, with 265 crashes reported countywide during the first 18 hours Monday, the CHP reports.

The County Water Authority reminds residents to turn off sprinklers to help save water after the rains.

On Monday, the state’s Department of Water Resources announced it will increase water deliveries to customers statewide, thanks to recent storms that have soaked the state. But wholesale agencies will still receive only 20% of normal allocations, up from 15% that had been announced, UT San Diego reports.

Snowpacks in the Sierras remain at only 19% of normal, however, so in this fourth consecutive year of drought, shortfalls of water are apt to continue this summer, unless more heavy storms occur.