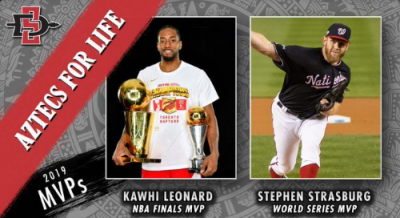 October 30, 2019 (Houston) - Washington Nationals pitcher Stephen Srtasburg has been named the World Series MVP after the Nats defeated the Houston Astros in game seven of the World Series tonight.

Strasburg, who went to West Hills High School and San Diego State, has become the first player from the same university as another MVP in a different sport to be named postseason MVP in the same season.  The other is Kawhi Leonard, who won with the Toronto Raptors in the NBA Championships this spring.

The Nationals defeated the Astros 6-2.