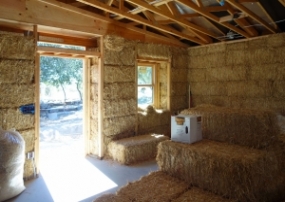 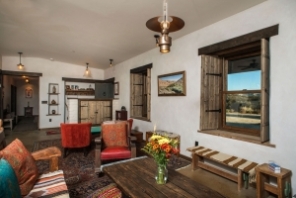 View video on the home’s construction and view tour of the finished residence.

July 14, 2018 (Campo) – Inspired by historical California adobe homes,  Brian and Susan Fallgren in Campo teamed up with Simple Construct to create a straw bale and adobe home that is beautiful, comfortable even in extreme heat, fire resistant and energy efficient—producing more power than it uses.

The home has also won numerous honors.  It’s the first residence in Southern California to receive net zero certification through the Living Building Challenge, one of only 27 homes in the world to win this recognition.  A participant in the California Advanced Homes Program, it was also a winner in  the San Diego Gas & Electric (SDG&E) 13th annual  Energy Showcase Awards and will be featured on the San Diego Green Building Council’s Green Homes Tour on Sunday, October 21.

“It’s an incredibly functional, comfortable home to live in, not only from an environmental standpoint, but from an every day livability standpoint,” Susan Fallgren says. 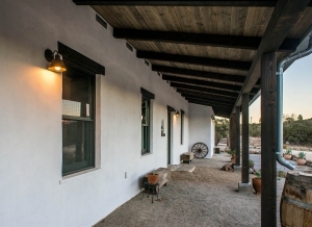 The couple became interested in building their own home 35 years ago while visiting Santa Fe, New Mexico, where a relative was building an adobe home. A book titled Straw Bale House and a visit to the Las Golondrinas museum, where structures from the 18th and 19th century were displayed, provided further ideas that germinated when the couple moved to Campo.

While volunteering at a state park, Brian Fallgren worked with a retired contractor who recommended Mike Long and Rebecca Tasker, owners of Simple Construct.

“It was synergy at first site,”  Brian says. The Fallgrens worked closely with Long and Tasker, who both have art backgrounds, on every element in their unique home.

“We only build straw bale and we focus only on natural materials that are nontoxic and have low embodied energy,” says Tasker. “Our philosophy is to start with the simplest, smallest and most passive systems and only add in technology when needed.” The design-build company takes projects from ideas through plans, permits and construction, including working closely with homeowners who want a truly hands-on experience helping to build their own homes. 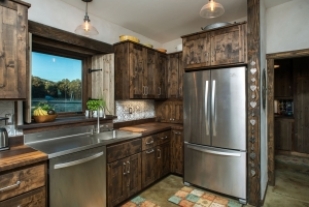 Tasker and Long  got training at SDG&E’s Energy Innovation Center in Clairemont, where they took classes and learned that the Fallgrens could get a rebate through the California Advanced Homes Program.

“There are lots of resources for those who are interested in building a home or making their home more energy efficient and reducing their carbon footprint,” says SDG&E’s communications manager Helen Gao. The Energy Innovation Center has free classes, a self-guided tour, plus a library with books and tools that the public can check out. The center also has programs for businesses, as well as a smart home where people can view technologies such as a smart thermostat that can be managed through a mobile phone.

SDG&E’s Energy Showcase Awards winners are chosen by a team of energy advisors and account executives who work with homeowners and businesses on energy efficiency programs. They nominate examples that go beyond legal requirements for energy efficiency and sustainability.

Expect a lot more such buildings in the future, since a new state law requires all new residential buildings to be net-zero by 2020 and all commercial buildings by 2030. Net zero means buildings produce at least as much energy as the use. 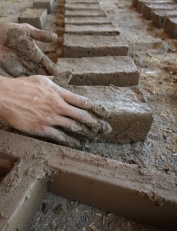 “Stories like the Fallgrens inspire other people to take it to the next step,” says Gao, adding that the award winners show not only  how to save money on utility bills, but also how to build a home or building that is comfortable.

Other winners included a hydroponic farm, a ship building company that switched from diesel to sustainable electric power, and a K-12 collaborative helping build energy-efficient features at schools.

Adobe bricks were created onsite at the Fallgrens’ property, utilizing pony walls to meet California seismic requirements for adobe homes.  Tightly packed straw bales inside walls have a fire resistance rating of two hours – far higher than the 45 minutes for most conventional homes.  The County has been very supportive of straw bale construction in recent years due to the excellent fire protection that it offers, Brian note. 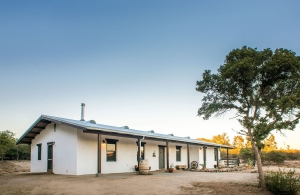 po, where temperatures can soar from 50 degrees to 100 degrees in a single day, the homeowners say.

The home also has a photovoltaic solar system that generates nearly twice the power needed.  Passive features such as orientation of the home toward sun exposure, thermal mass, shading and natural ventilation also help keep the home cool in summer and warm in winter.

Use of natural materials included clay plaster, adobe blocks, upcycled straw from wheat produced in Imperial County, and wood recycled from old sheds on the property. “Not only does it use less energy, it took less energy to build it,” Tasker notes.

The home is 1,600 square feet, but Susan observes, “Inside, it flows beautifully.” Hallways and a kitchen 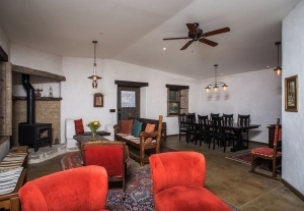 entrance are wide. “We especially designed our living room/dining room area to accommodate eight people at a table, or with switching furniture around, we have 24 people gathered at times with family and friends.”

There are also simple elements of beauty and creativity, such as acid-staining on the concrete foundation to add colorful touches without the needed for flooring materials.

On learning of the SDG&E award, Susan says, “We were extremely pleased with SDG&E for recognizing our home.” She also thanked Simple Construct’s team for their hard work.  “We feel honored – we were in a lot of good company.”

“This project has been a wonderful experience for both of us,” says Brian, who says the best part is “feeling like we are part of a movement.”  San Diego County has a housing shortage right now, he notes, adding that a big issue is where to build new homes.  He hopes to start a conversation on another issue: “How do you build those?”

Gao concludes, “I would encourage people to take advantage of programs out there to make their homes more energy efficient…whether they’re building new or remodeling their home, it’s good for reducing their energy bill—and also good for our planet.” 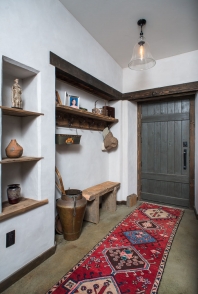 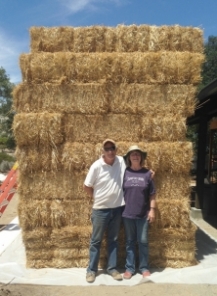 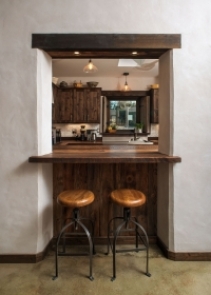 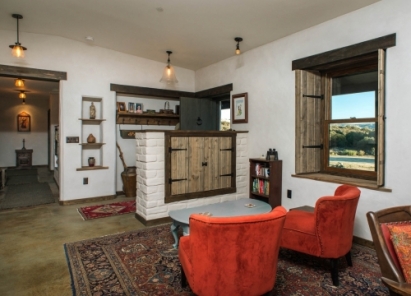 Now if apartments could be built the same way. One question though. If we the consumer, begin to use and less electricity (as we're asked to do), will SDG&E raise the rates like Helix water did because their not selling as much and need to make up for lost revenue for the shareholders? This on top of ever increasing energy rates has gotten out of control. Feels like extortion.