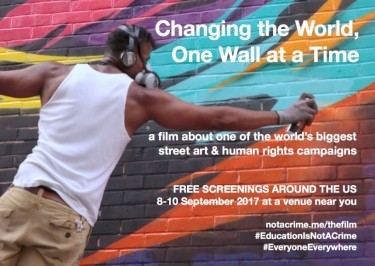 August 30, 2017 (El Cajon) -- Changing the World, One Wall at a Time, is a documentary feature film on Education Is Not a Crime – the world’s largest street art and human rights campaign, which raises awareness about education apartheid by Iran’s government against tens of thousands of Baha’is in the country.

The film premiered at the Harlem International Film Festival in New York City in May. It will be shown at the El Cajon Branch Library (201 East Douglas, El Cajon) on Saturday, September 9 at 3 p.m. in the Community Room.

The film was produced by Iranian-Canadian journalist Maziar Bahari as part of the worldwide Education Is Not A Crime campaign.

The Baha’is, who believe in ideals such as the equality of men and women, peaceful non-violence, and universal education, have been persecuted by the Iranian government since the 1979 Islamic Revolution. As part of this persecution, the government bars Baha’is from teaching and studying at Iranian universities.

Education Is Not A Crime raises awareness of this discrimination. The campaign began in 2014 with Bahari’s documentary film To Light a Candle, which was screened in nearly 300 locations around the world, before expanding into a global street art project raising awareness about the Baha’is.

“Changing the World, One Wall at a Time, is the story of an ambitious campaign,” Bahari said. “We fought brutality with arts and creativity. The fact that we brought together so many artists – who did not know anything about the persecution of the Baha’is in Iran, and who then created amazing works of art all around the world – shows there is a willingness among people many different backgrounds to join such a struggle.”

Forty-one murals have been painted in US and international cities as part of the project: Atlanta, Cape Town, Delhi, London, Nashville, Sao Paulo, Sydney, with two-dozen in New York City. Nineteen of the New York murals were painted in the iconic Harlem neighborhood because of its long association with cultural innovation during the Harlem Renaissance and the 1960s Civil Rights movement.

Street artists and human rights activists teamed up to use art, social media and community outreach to build a new audience for their message of education equality in Iran.

Changing the World, One Wall at a Time features interviews with popular artists – such as Rone from Australia, Astro from France, Marthalicia Matarrita from New York, and Elle from Los Angeles – as well as activists with experience of the Civil Rights movement, the anti-Apartheid struggle in South Africa, and human rights work on behalf of Iranians of all backgrounds.

Iranian Baha’is with personal experience of being denied their right to higher education also share their stories. The film is presented by Executive Producers Maziar Bahari and Saleem Vaillancourt.