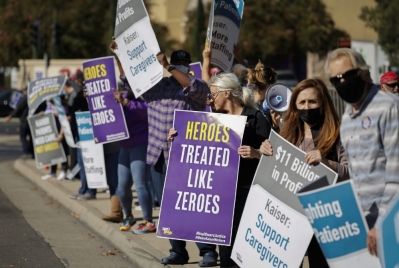 “We reached a tentative agreement with Kaiser Permanente early this morning. No strike!” said Todd Walters, president of Mission Valley-based Local 135 of the United Food and Commercial Workers union.

Walters told Times of San Diego this was the closest the union had gotten to a work stoppage since 2004.
In a joint news release, Kaiser and the Alliance of Health Care Unions said the agreement on a four-year contract includes new staffing language to continue to protect employees and patients and annual wage increases.
“When ratified, the agreement will ensure Kaiser Permanente patients continue to receive safe, high-quality care and service; maintain Alliance union members’ industry-leading wages and benefits; and ensure Kaiser Permanente remains affordable for its members in the future,” the alliance and hospital chain said.
Details of the tentative agreement include:
Christian Meisner, senior vice president and chief human resources officer at Kaiser Permanente, said the “landmark agreement positions Kaiser Permanente for a successful future focused on providing high-quality health care that is affordable and accessible for our more than 12 million members and the communities we serve. It also underscores our unwavering commitment to our employees by maintaining industry-leading wages and benefits.
“These were challenging negotiations, but this tentative agreement demonstrates the strength of our labor management partnership and the unique success it can achieve when we work together.”
UFCW Locals in Southern California are part of the alliance, a coalition of 21 labor groups that represent over 50,000 health care employees across the country. At 7 a.m. Monday, UNAC/UHCP, USW Local 7600 and OFNHP, three of the alliance’s largest unions with 32,000 members, had been set to walk off their jobs if a deal couldn’t be reached.
UFCW locals were to follow three days later — on Thursday.
The tentative agreement was approved by members of the economic subcommittee of the Alliance of Health Care Unions and will now go to the full common issues committee and then union members for ratification. Voting on the tentative agreement will occur over the next several weeks.
If ratified, the agreement will have an effective date of October 1, 2021.
In October, union members voted overwhelmingly to reject the company’s offer and authorize a strike if a new deal couldn’t be reached. Employees with 58,000-mmber SEIU-UHW began voting this week to authorize a one-day “sympathy strike” on Thursday, Nov. 18.
Strike votes were taken by members of six United Food and Commercial Workers locals, including UFCW Local 135 in San Diego.
“Though a strike is a last resort, taking this vote gives us a powerful tool to wield at the bargaining table to help negotiate these frontline healthcare professionals the best contract possible,” Grant Tom, secretary-treasurer of Local 135, said in late October.
The deal to avert a strike wasn’t reached until 3 a.m. Saturday, Walters said.
“National bargaining continues and there has been some healthy dialogue between Alliance of Health Care Unions and Kaiser negotiators,” said a strike update Wednesday on the Local 135 site. “Real conversations are taking place that could have potential impact.”
A strike would have affected 366 Southern California hospitals and medical centers in Anaheim, the Antelope Valley, Baldwin Park, Downey, Fontana, Harbor City, Irvine, Los Angeles, Ontario, Panorama City, Riverside, San Diego, West Los Angeles and Woodland Hills, reported the Los Angeles Daily News.
“Workers ranging from nurses, pharmacists and physician assistants, to occupational therapists, appointment clerks and environmental service employees, plan to participate. They are protesting Kaiser’s plan to implement a two-tier wage system that would lower pay for incoming and future healthcare workers,” the paper said.
In October, union officials said members overwhelmingly rejected the company’s offer of a 1% raise annually for a total of 3% over three years.
Since the COVID-19 pandemic began, hospitals across California have suffered from inadequate staffing, though pay also remains a key issue for union members.
The San Diego local represents over 400 pharmacy and laboratory workers, including pharmacy techs, pharmacy assistants, clinical laboratory scientists, medical laboratory technicians, and others.
The national agreement with Kaiser Permanente expired on Sept. 30, and the local agreements for pharmacy and lab expired Nov. 1 and Feb. 1, respectively.