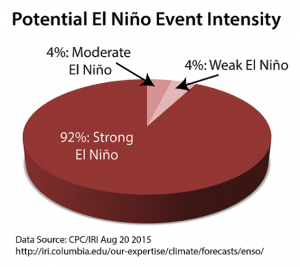 September 30, 2015 (San Diego)—The Federal government’s Western Regional Climate Center is predicting with 92% certainty a strong El Niño from December to February.  Additionally, forecasters say there is a 50% chance that winter precipitation totals will be in the top 33% of historic values across Southern California, Arizona and New Mexico.

El Niño is a warming of the Pacific Ocean along the equator typically associated with wet weather conditions in southern California and inland southwestern areas.

Conversely, the condition is also associated with drier than normal conditions in the inland Northwest and northern Rocky mountains.

Because the El Niño does not usually extend to northern California, it is not known whether it will impact  the Sierra snowpack or just what the impact of a single wet winter will have on the state’s four years of drought, since reservoir levels are at historic lows.