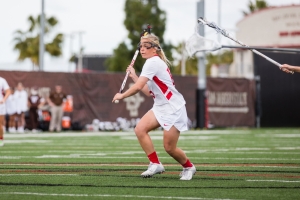 SDSU erased a 6-5 deficit early in the second half with an 8-0 blitz over the final 26:29 to raise its record to 6-1 on the year, matching the program’s best seven-game start to a season after the 2014 squad accomplished the same feat.

In addition, the SDSU cause was advanced by goalkeeper Katy Sharretts, who made nine saves, including six in the second half, to go with a team-high three ground balls.

Not to be outdone, Morgan Taylor caused a pair of turnovers and collected two ground balls, along with Sheehan, Sullivan, Jill Haight, Natalie Peel and Courtney Robinson.

The two sides were tied with 17 shots apiece in the first before the Aztecs took charge in the second half, maintaining a 21-9 advantage in that statistic and a 38-26 spread for the game.

The Scarlet and Black also held the upper hand in ground balls (21-17), draw controls (12-9) while converting 4-of-9 free position attempts, including a 3-for-4 clip in the first half.

The Mountain Hawks (3-3) took their only lead of the game at 6-5 when Courtney Henig found the back of the net with three minutes elapsed in the second half.

However, SDSU vaulted in front for good on two quick strikes by Greenlaw just 13 seconds apart near the 26:16 mark after Haight and Steele each came up with a draw control.

The score remained unchanged over the ensuing 15-and-a-half minutes until Sullivan’s free position shot tickled the twine with 10:41 left to give the Aztecs some much-needed breathing room at 9-6.

Moments later, Sheehan assisted on goals by McGinty and Peel just over a minute apart, as San Diego State began to take control. The Aztecs recorded three additional tallies in the final 4:05 by Sullivan, Steele and Greenlaw, who unloaded a cannon shot with 38 seconds remaining to provide the proverbial exclamation point on the afternoon.

Henig and Kellie Gough finished with two goals apiece to pace Lehigh, while Alexandra Ladda picked up three ground balls in the loss. Elsewhere, Samantha Sagi came up with 13 saves, including eight in the first half, but was chased at the 3:36 mark of the second period after Steele’s aforementioned goal.

“At halftime I told our team that they weren’t tired and that they needed to start playing with the right kind of energy,” said SDSU head coach Kylee White. “They were getting caught up in some of the chippy, behind-the-play stuff and their focus was not on the task at hand. They needed to focus on what was important in the moment.

“We had watched enough of them to know what they were trying to draw. We got caught on it in the first half. We knew that 70 percent of their goals were fed in and I was getting pretty frustrated after that first half because our game plan was to be ready for that and to be tight on the ball, so they couldn’t get the feed in. But we stepped up on how we played ball and changed our angles to deny those feeds inside. And then we were just scrappy on the second-effort balls.”

“Although you don’t necessarily see it on the stat sheet, Natalie Peel was kind of a spark for us off the bench; she came up with a couple of crucial ground balls. Taylor Sullivan is so amazing; she’s did everything all over the field again. It was also great to see Kirstie Greenlaw find the back of the net; she’s got a tremendous shot. To give her space today was clearly rewarding. Marissa MacRae and Jenny Buckland were on fire defensively; they held their top scorer (Sondra Dickey) to just one goal.”

San Diego State continues its busy stretch on Wednesday, March 13 when it plays host to Bucknell at 7 p.m. Admission to all Aztec home lacrosse games is free.