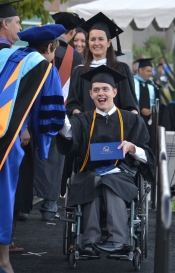 Brandon Kover was accompanied at Cuyamaca College’s commencement ceremony by his favorite instructor, Lindy Brazil, who helped her former student through the processional.

August 21, 2015 (El Cajon ) --A doctor told Brandon Kover’s parents soon after his birth that as the extremely rare individual born without a cerebellum – the region of the brain critical to motor movement and balance – he would be a human vegetable, unable to move or communicate.

In June, wearing a cap and gown draped with the gold cord of an honors graduate, the 23-year-old Rancho San Diego resident was part of the Class of 2015 at Cuyamaca College’s 37th annual commencement ceremony. He took part in the processional seated in a wheelchair, clapping as he received his associate degree in web development, and certificates in web design and web programming. 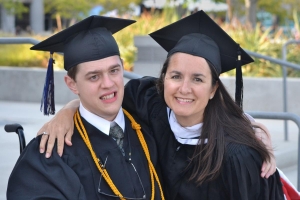 It took five years and a mother’s infinite love, along with the support of college administrators, instructors and staff, including the team of counselors and specialists at Cuyamaca College’s Disabled Students Programs and Services (DSPS) office. It was a spectacular day marking a stellar achievement.

Kover is only one of nine documented cases in the world of people born without a cerebellum, his mother, Annette Kover, said. He has ataxic cerebral palsy, so his movements are sometimes jerky and his speech is difficult to understand.  But put him behind a computer or place a smart phone in his hands and you would never know he has a disability.

“This is the culmination of so much work on the part of his whole family, but especially Brandon,” said his father, Jeff Kover.  “Brandon has overcome great odds. He has inspired so many with his grit, his resolve, and his talents. But to his teachers, he was one of many that were there to get a start on life. And they did that for him. We will be forever grateful.”

“We are so proud of Brandon and all of our graduates who have persevered and overcome great challenges,” he said. “We recognize the diverse needs of our students and as a team, we are committed to the educational success of each and every student.”

Kover said in an email interview that he had a great experience at Cuyamaca College, where he was offered assistance and support while still being accepted as “just another student” despite his unique condition.

“DSPS has helped me throughout my college experience by arranging for extra time on tests, providing a table in most of my classes, and of course, Club ABLED,” he said.

Graduating with a grade-point average of 3.75, Kover excelled in his classes, scoring high on essays and written tests. Because of his speech impairment, he relied on a Tobii C12 speech generating device for classroom presentations.

At age 2, Kover enrolled at El Cajon’s Sevick Elementary School, where his special education classes introduced him to computers, opening up a whole new world for the toddler. Over the years, he became adept with the keyboard and was eventually mainstreamed into classes at Steele Canyon High School.

With both parents being educators – his father is the visual and performing arts director for the Sweetwater Union High School District and his mother is a former music teacher – college was a given. Cuyamaca College is just down the street from home, so the Rancho San Diego community college was an easy pick.

Lindy Brazil, Kover’s favorite instructor at the college, helped her former student through the processional at commencement. The composition teacher said his test scores showed the second highest improvement of all the students who have ever taken her class.

“Brandon is a remarkable young man who has achieved great things by working hard and persevering,” she said, teary-eyed at commencement. “His entire family supported him so much through this process and it is such a great privilege for me to be able to share in celebrating his success.”

Kover’s mother, who often accompanied her son to class as his note-taker, said she was struck by how much Brazil cares for students and all that she does to help them succeed.

“Lindy had Brandon in her class only during his freshman year, but what I remember from that first day of class was her saying that she wanted to get to know him,” said Annette Kover, who gave up her career to devote herself to her son’s college education. “She took the time to talk to Brandon and made him feel very much a part of the class.”

Not all instructors allowed Annette Kover in the classroom, but she said the separation taught her son to become self-reliant, a point echoed by Mary Asher-Fitzpatrick, a learning disabilities specialist at Cuyamaca.

“DSPS encourages and strives to assist students to use and develop self-advocacy and independent skills as much as possible,” Asher-Fitzpatrick said.

That is also the message of Club ABLED, a campus group for students with disabilities which Kover joined and volunteered as webmaster. Asher-Fitzpatrick is the club’s co-adviser, along with Margaret Jones, a speech, language and cognitive specialist with DSPS.

“Brandon was at first unsure when I asked him to be the group’s webmaster, but the more he did it, the more confident he became and he helped make improvements,” she said. “We see students like Brandon who have great challenges, but it’s pretty amazing how they can succeed if they are willing to persist and work hard.”

While students with disabilities are provided tools and resources to improve learning, all students are held to the same academic standards.

“Unlike the K-12 system, community colleges do not provide special ed,”Asher-Fitzpatrick said. “We provide academic accommodations to students with verifiable disabilities that help them reach their educational goals. We counsel and work with students in DSPS to identify achievable goals and to develop an education plan.”

When a student seeks services from DSPS, the office first verifies the disability, then provides an orientation to identify the student’s particular classroom needs. These needs or accommodations include Braille or enlarged text for the visually impaired, voice amplifiers for the hearing impaired, assistive software and hardware, and more.

Classes are also offered that teach self-advocacy, learning strategies, the use of assistive technology, and maximizing communication skills.

“The teachers believed in him,” Jeff Kover said. “They pushed him. They did not coddle or take pity. This is not to say that your great teachers did not care. On the contrary, they cared enough to treat him as though he could achieve anything.  Cuyamaca College has taught Brandon that anything is possible, and that dreams really can come true.”

Now that he’s finished at Cuyamaca College, Kover hasn’t decided what he will do next. He said a business class he took has him interested in becoming an entrepreneur. Pursuing a bachelor’s degree is also a possibility.

For now, he’s relishing the feeling of achievement from his five years of diligent study at Cuyamaca College and the sheepskin finally in his possession.

none of us is perfect and yet we all have opportunities to work toward something, as you have done so well. You are, or should be, an inspiration to others.