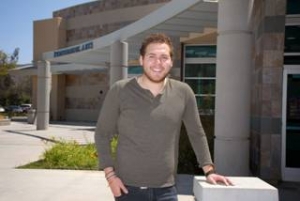 This is part of an occasional series of profiles of successful Cuyamaca and Grossmont students.

The product of an impoverished San Diego neighborhood, Gudino now spends endless hours helping youth there as a volunteer teaching young children how to read at the Malcolm X Library in southeastern San Diego and working with the AVID program at an Encanto middle school.

“I just want to do what I can to help kids who are in the same situation I was in when I was growing up,” said Gudino, who still lives in the neighborhood with his family. “I want to have an impact.”

The road to Cuyamaca College was a meandering one filled with myriad challenges, but Gudino is determined to set an example.

It isn’t easy. Walking to school has its perils. Gang members are ubiquitous. “Graffiti is everywhere. Broken windows, shootings, it’s normal to see stuff like that in my neighborhood all the time,” said the 25-year-old.

Gudino’s family, though, supported his education and enrolled him at the prestigious High Tech High School in Point Loma. He was accepted to several universities, including Cal State Fullerton and Cal State Chico, in his senior year of high school, but opted to start working instead.

“I wasn’t that serious about getting a college education at the time,” Gudino said.

But after working as a bagger in a grocery store, a clerk at Lowe’s and an executive assistant at Yellow Cab of San Diego, Gudino decided to focus on his education. “It was time to get serious about school,” he said.

Gudino is the first in his family to go to college, and he has been named an Osher scholar.

“It’s the smallest of the community colleges around here and it’s only 15 minutes from my house, so it was perfect,” Gudino said. “After my first semester here, I was sold. I decided to stay.”

He is on pace to earn his associate of arts degree this summer with a major in humanities and fine arts. He plans to transfer to a University of California campus in the fall. He’s leaving his career options open for now.

In the meantime, he continues to volunteer. He also works weekends in Encinitas to help finance his education. And he remains devoted to the opportunity he had at Cuyamaca College.

“Cuyamaca has incredible counselors and fantastic professors, and everybody there is working for the students,” Gudino said. “It is just a great community college.”