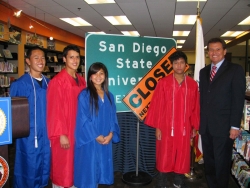 2 BILLS BY BLOCK TO HELP LOCAL STUDENTS WILL BE HEARD WED. IN SACRAMENTO

June 29, 2010 (San Diego) – “What was once my dream had become a nightmare on the day I was notified that I was denied admission,” Donna Chanthalangsy, a student who had met all requirements for admission to San Diego State University. “I was angered, saddened and disappointed.”  She is among 1,740 local students rejected by SDSU due to a last-minute rule change made by SDSU president Stephen Weber.

“I do not have the financial means to attend and live at a college outside of San Diego,” she said, adding that she needs to stay here to help her mother, a Lao immigrant who does not speak English.

Chanthalangsy has maintained a 3.6 grade point average and scored 1300 on the SAT. She met all other requirements and served as AVID president at her high school. Now, she will be attending a community college. “While I wiped countless tears, I still care and have hope,” she said, thanking Assemblyman Marty Block for leading efforts to help local students.

“These students played by the rules and fulfilled the requirements for admission, yet they have disenfranchised by their local university,” Block said in a press conference this morning at the Bonita Library in Bonita. “It is deplorable that SDSU’s administration changed its admission policy at the last minute, without public input and no regard for the students whose college careers have now stalled before th ey’ve even begun.”

Block has introduced two bills, AB 2402 and AB 2401, which have passed the Assembly and are slated to be heard tomorrow in the Senate Education Committee. AB 2401 would require CSU campuses to give priority to students within a campus’ local service area. AB 2402 would mandate that CSU campuses notify the public and hold public hearings on any proposed changes in admissions policy that would impact local students. Any changes approved would not become effective until one year later.

Richard Barrera, president of the San Diego Unified School District Board of Education, also criticized the change in admission rules. “AB 2401 and AB 2401 are critical,” he said. “They will ensure CSU keeps its promise to our local students and their families.” Barrera noted that limiting higher education opportunities for local students also negatively impacts San Diego’s economy and the region’s ability to create a “strong, capable workforce ready to take on the jobs of tomorrow.”

Christine Leon, another local student, said she felt compelled to stand up “not just for myself, but for the 1.740 local students who should have been granted to SDSU.” She noted that while all campuses face budget cuts from the state, only SDSU chose to eliminate local student guaranteed admissions. “Why?” she asked. “I really don’t want to believe the idea that SDSU wants to fill their dorms with out-of-town students to increase revenue at the expense of locally qualified students.”

Chanthalangsy called on Weber to change the policy immediately , noting that she and other local students “all believed that if we worked hard and met the requirements that we would be admitted to SDSU. We are not just numbers,” she concluded, “we are people—people who dedicated ourselves over the past four years in the pursuit of our dreams of higher education at our local state university.”

Hmmm, I am thrilled to hear your story. My one hope, hopefully you can continue your dream. from today onwards. http://qampus.blogspot.com/2010/05/indonesia-furniture-handicraft.html
http://bangancis-ngeblog.blogspot.com/2010/06/blogger-indonesia-dukung-i...