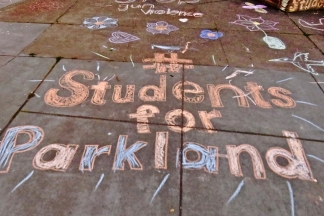 You can sign up to join or lead a march in your community at www.MarchForOurLives.com.

February 20, 2018 (San Diego’s East County) – Students at Marjory Stoneman Douglas High School in Parkland, Florida have a message for lawmakers and the national media in the wake of a mass shooting that killed 17 people on their campus last week.

The teenagers from the school have announced that they will lead a nationwide demonstration on March 24 called the “March for our Lives.”  You can sign up to join or lead a march in your community at www.MarchForOurLives.com.

The marches will be held not only in Washington D.C., but in cities across the nation, calling on Congress to enact gun control measures including reinstating a ban on assault-style weapons and purchase of large-capacity ammunition magazines. “We are going to be marching together as students, begging for our lives,” 11th grader Cameron Kasky told ABC news.  He says the message for America’s adults is that young people’s lives are on the line, adding, “At this point, you are either with us or against us.”

The students plan to expose politicians who have taken large contributions from the National Rifle Association, or NRA, while voting against measures to reduce gun violence.  Kasky wants there to be a “badge of shame” associated with every politician who takes NRA money and opposes legislation to restrict access to weapons such as the AR-17, the gun that was used by shooter Nikolas Cruz in the Florida campus killings as well as in many other mass shootings, such as the massacre at a country western concert in Las Vegas.

Gun access wasn’t the only issue in the Florida killing.  The FBI has admitted if failed to follow protocol by not following up on numerous tips reporting Cruz’s violent social media posts and threats calling for harm to blacks, Mexicans and gays. Mental health concerns are issues in this as in many other recent shooting massacres.  Addressing such problems may help prevent future killings.

But the single biggest action to save lives that students are calling for is restrictions on access to military-style assault weapons and the large-capacity ammunition magazines.

A bill by California Senator Dianne Feinstein was passed by Congress and signed into law in 1994. But in 2004, Congress repealed the ban.

That’s at odds with public opinion.  A poll last year by Pew Research found that 68 percent of all adults support banning assault weapons and 65 percent support banning high-capacity magazines. Nearly half – 48 percent – of gun owners even agreed that such bans should be supported, a Quinnipiac poll in 2017 found.

But opponents of gun restrictions insist that the 2nd Amendment to the Constitution, which protects Americans’ right to bear arms, means unfettered access to every sort of gun.

Reform advocates argue that times have changed, noting that when the Constitution was written, guns were single-loading muskets and that the founding fathers envisions a well-trained militia, not lone wolf gunmen committing mass murder.  Moreover, the Constitution once allowed slavery and prohibited women from voting – all things that later generations decided to change.

After every mass shooting, voices calling for reform have arisen. But thus far, all have been shot down by the Republicans in Congress, who have blocked all efforts at even gun reforms.

Instead they have supported bills to expand access to guns, instead of limiting access.  For instance, Congress passed a measure in December authored by Congressman Duncan Hunter that would allow gun owners with concealed carry permits to legally carry concealed guns in every state, even places such as California that have sharply limited carrying concealed weapons.

Students from Parkland, Florida and their peers across the nation hope that this time, things will be different, with social media mobilizing an army of young people armed with cell phones, Instagram and YouTube accounts.  They’re attracting some high-profile support, too. Movie star George Clooney and his wife just announced that they will donate half a million dollars to the Parkland students’ March for Our Lives.

The March for Our Lives website states, “Every kid in this country now goes to school wondering if this day might be their last.  WE live in fear.” But the site concludes, “It doesn’t have to be this way. Change is coming.  And it starts now, inspired by and led by the kids who are our hope for the future. The young voices will be heard.”