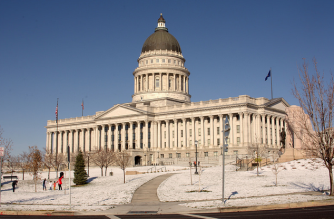 May 18, 2018 (Salt Lake City) – Students mobilizing on gun violence issues have captured headlines nationwide. But another student-led effort has yielded tangible results: in Utah, one of the most conservative stations in the U.S., a coalition of students persuaded the Utah Legislature to adopt a resolution declaring climate change real and committing to strive for solutions.

Utah currently gets over 90 percent of its electricity from fossil fuels and Republicans occupy 83 percent of legislative seats.  But the students’ persevered, High Country News reports.

Logan High School students, after studying the impacts of climate change on wildfires and drought, grew concerned on learning that the Legislature had passed a resolution to ignore climate change until science was more convincing. So, in 2016, the students began working to convince their elected representatives that climate changed posed serious threats.

The drafted their own resolution, but were told by some officials not to waste their time.  Their resolution initially died after falling just shy of enough votes to clear committee.  So, students teamed up with the Citizens’ Climate Lobby and other groups to create a climate solutions panel that included prominent members, notably mayors and the director of the governor’s energy office.  They also gained support from a business coalition that included major companies such as Rocky Mountain Power, ski resorts and also the Salt Lake Chamber of Commerce.

A new resolution was introduced and with amendments, won approval first in committee before passing the House 51-21 and the Senate by an overwhelming 23-3 vote.  Republican Governor Gary Herbert then signed the landmark measure into law.

Their success provides inspiration to students advocating for other causes, teaching a lesson in perseverance and educating public officials.

What a fantastic group of insightful young people! Now if they can just convince the Trump administration...