By Miriam Raftery
Tanya Huang also contributed to this story

November 15, 2010 (San Diego)--Student reactions ranged from dismay to outrage upon learning that the University of California regents will consider an 8% fee increase for the 2011-2012 school year, while the California State University board of trustees has proposed a 5% increase for spring semester and a whopping 10% increase for 2011-2012.

Following last year’s 32% fee increases at the UC and a 5% increase at CSU campuses, many students fear that their dreams of a college education are fast disappearing. 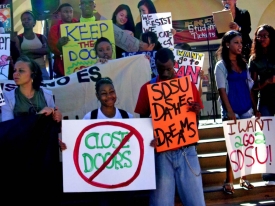 Tanya Huang, a journalism junior at Sam Diego State University (SDSU), predicted, "If fees continue to increase each semester, more and more students who can't afford the high costs will be forced to drop out of school.”

She added, “My family's income has always been higher than the requirements for financial aid, but that doesn't mean we're rich. I'm lucky to have my parents helping me out with fees but I always work two to three part-time jobs to pay for living expenses and school expenses in addition to keeping up with extracurriculars on campus. I can't imagine how students who are completely financially independent will continue to make ends meet, " said Huang, who is currently an intern with East County Magazine.

“It is despicable that the Regents are including fee hikes and increases to executive pay in the same budget proposal. When students such as myself have to worry about where they’ll get the money for rent and books, the last thing that should be considered are more fee increases and raises to executives. The students need to see some relief, not the executives; we are being taxed out of a college education,” stated Kelsey McQuaid, California College Democrats Communications Director.

CCD is calling on the UC Regents and the CSU Board of Trustees to stop balancing the budget by increasing tuition; they should be looking to other alternatives such as state funding and cutting excesses in executive pay.

"The fee increase has essentially no effect on me because I have financial aid. If they want to pay more for my financial aid, they can go right ahead,” said Ramtin Kouchak, kinesiology senior at San Diego State. “But I do feel for other students who have to pay for school entirely on their own.”

Other students seemed resigned to higher fees. “The state's broke so everyone's just doing what they have to do," said Melissa Weller, communications senior at San Diego State University.