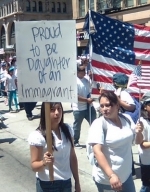 (November 29, 2010 ) San Diego--Hundreds of DREAM Act students and supporters are expected to light up San Diego County bridges with banners displaying the word “DREAM” and a candlelight vigil during rush-hour on Monday, November, 29, from 5:30—7 p.m.

They are raising awareness for the DREAM Act (Development, Relief and Education for Alien Minors) bill, which will come to a vote in Congress as early as Tuesday, November 30. The DREAM Act would provide an opportunity for undocumented students who were brought to the U.S. as babies or children to obtain permanent residency and eventually citizenship.

They would be required to complete two years of college or military service, among other requirements. Senator Harry Reid will introduce the bill as early as Tuesday, November 30th, during the lame duck session. Advocates hope that Democrats and Republicans will unite to make the bill a reality.

For DREAM Act student Nidia, who is working towards her Master’s degree in Marriage and Family Therapy, “This is the only home I have ever known. It would be incredibly disappointing if I am unable to give back to my home, and after all this work, cannot achieve the dreams I believe the U.S. can make a reality for me. I’ve come so far, that I think it is only fair that I can continue pursuing what I love, and get the opportunity to put my education into practice. Without the DREAM Act, I cannot utilize my skills to their fullest potential and be there for my community in San Diego.”

Opponents are also mobilizing to urge Congress to defeat the measure. The website http://www.noamericandreamact.org contends that children of undocumented immigrants should not receive cheaper tuition than out-of-state nonresident U.S. citizens. The site calls illegal immigrants “a drain on our national resources.” Some opponents have called for deportation of immigrant children, even those that have lived here for most of their lives and have graduated from high school with high academic achievements.

Undocumented students dream of one day being able to fully contribute to the American society they grew up in without fear of retribution for decisions made by their parents. “For many of these high school, undergraduate, and graduate students, the United States is the only home they have ever known. They are engineers, educators, health practitioners, scientists, and more,” a release issued by tonight’s event organizers states. “Although they were brought to this country without a choice, they have chosen to share their talent, education, and determination with the United States. This country cannot afford to reject gifted young people who are positively contributing and building on its education, economics, and passion.“

Tonight’s local action in support of the Dream Act is being hosted by Justice Overcoming Boundaries (JOB), a countywide-interfaith community organization, and the San Diego DREAM Team, a coalition of DREAM Act students from College and University Campuses throughout San Diego County.

Students, families, professors and local activist to be present at each bridge, said Kendall Tyree, one of the organizers.

The following bridges and overpasses will be illuminated on Monday evening, illustrating what could be the “Bridge to Opportunity “ for millions of deserving students across the United States:

For further information on the actions taking place at each bridge, contact JOB Community Organizer Kendell Tylee at (619) 677-7330 or Kendell@Justicesandiego.org

In the final paragraph about the DREAM Act candlelight vigil, it states:

"The following bridges and overpasses will be illuminated on Monday evening, illustrating what could be the “Bridge to Opportunity “ for millions of deserving students across the United States:"

That sure seems like an ENDORSEMENT to me rather than a reporting of the news. If that's the case, I will unsubscribe immediately.