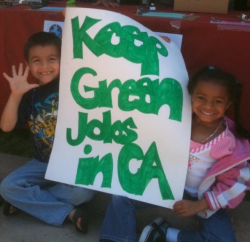 August 1, 2011 (San Diego’s East County) – Sempra Energy has asked the U.S. Department of Energy for a presidential permit to construct a cross-border transmission line called Energia Sierra Juarez to import electricity from Sempra facilities in Mexico. The line would cross the border near Jacumba in San Diego’s East County.

Now a new report claims the project will cost jobs and loss of tax revenues in the U.S., particularly Imperial County, where the unemployment rate is the nation’s highest at 27.9%.

The study, “Should Green Jobs Be Outsourced: A Case Study of Lost Jobs and Lost Opportunities,” was authored by Dr. Peter Philips, professor of economics at the University of Utah. The study found that building renewable energy in Mexico instead of in California will result in loss of up to 15,000 U.S. jobs and nearly $300 million in lost local, state and federal tax revenue. View the full study at http://faculty.utah.edu/bytes/curriculumVitae.hml?id=u0035312

International Brother of Electrical workers Local 569 business manager Johnny Simpson agreed. “With construction unemployment at its highest in a generation, we can’t afford to outsource even one construction job as Sempra is proposing to do.”

But Scott Crider, spokesman for San Diego-based Sempra Energy, blasts the reports findings. “This biased study was not an independent assessment of Energia Sierra Juarez,” he said. It was paid for by labor unions opposed to the wind project, and the outrageous claims are pure fiction.”

In reality, the first phase of Energia Sierra Juarez will create about 300 direct jobs on both sides of the border, Crider claims. “ It will also bring hundreds of millions of dollars in clean tech investment to the region while producing enough clean, wind power for about 65,000 San Diego homes.” He added, “Energia Sierra Juarez is just one small piece of the region’s overall energy puzzle that includes several new solar and wind projects in San Diego and Imperial Valley. Sempra Generation has created more than 1,000 real jobs in the U.S. through its investments in wind and solar.”

“We’re not going to lose jobs because someone builds a project in Mexico,” he said, adding that the Valley is positioned to be able to transmit northwest to Los Angeles and Orange County, as well as east to Arizona or even south to Mexico, in addition to San Diego (if the Sunrise Powerlink is built).

But some others are questioning whether the line needs to be built at all. “The stated goal of the Obama administration is to create jobs and become energy independent. Exporting jobs to Mexico to import foreign produced energy from a Sempra wind project does neither,” said Donna Tisdale, chair of the Boulevard Planning Group and a plaintiff in lawsuits seeking to block the Sunrise Powerlink transmission lines on the U.S. side of the border.

“Bottom line: There is no need for any of these industrial scale remote wind or solar projects,” she wrote in an e-mail to ECM regarding the latest study. “With the economic downtown and new energy efficiency and conservation efforts, less energy is needed,” she added, noting that “point of use renewable energy projects are being incorporated into new buildings and added to existing structures and facilities, including UCSD water treatment operations and military bases, to reduce energy consumption from the grid and the higher energy rates that go with them.”

Woman owned company presentation on all their point of use renewable energ projects: http://www.epa.gov/ocempage/gneb/pdf/2011/2011_0616_scarlata_presentatio...
More point of use project details and photos from their website: http://indenergysolutions.com/projects/

My presentation on adverse impacts from remote rural projects: http://www.epa.gov/ocempage/gneb/pdf/2011/2011_0616_tisdale_presentation...