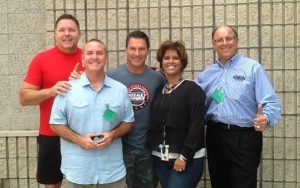 (This article provided by the San Diego County Office of Education, which provides instruction to juveniles in County of San Diego Probation facilities.)

Each story was different, but each speaker had a clear message: choice. They made a choice to overcome their past and to be something in life.

This powerful panel was put together by San Diego County Office of Education teacher Delia Pearsons for her students at the San Diego County Probation Department’s East Mesa Juvenile Detention Facility. As the speakers told their stories, the kids were nodding, laughing, and learning.

Pearsons says, “Sharing their stories holds great weight and serves to inspire and instill self-esteem and self-worth among each of our students. It's powerful to see the connections made with a population often a challenge to connect,” she added.

Sablan, like many of the Juvenile Court and Community Schools students, grew up in Chula Vista and knows the power of outside influences. He spoke of wanting to go back in time and talk to his brothers about the choices they made. Both of them died from heroin addiction.

Plummer, who won a Super Bowl ring with the San Francisco 49ers and is a former San Diego Charger, told the kids of his journey to playing in the PAC-12 and the National Football League.

Like the kids he was addressing, Plummer grew up with not a lot of money. He was told he was too small to play college football. He made a choice to prove all his naysayers wrong. He went on to play for UC Berkley and eventually make it to the NFL.

Plummer told the kids, “If you believe in you, that is all that matters.”

Local business owner Gary Fenelli told students of a choice that he made that cost him his business. The choice could have defined him, instead he made the choice to work even harder to be successful in his next business: cars. He and his family own one of the most successful auto groups in San Diego.

Fitness expert Clark Bartram started his talk by showing the kids a magazine. Most of the students were in awe when they realized it was Clark on the magazine cover.

Bartram challenged the kids to use the time they have in the facility to think about what they want out of life, to come up with a plan on how to get it, and most importantly, to act on the plan.

Pearsons concludes, “The panel really resonated with the students. It is important for them to see that success is earned--and it can happen for anyone who works for it.”