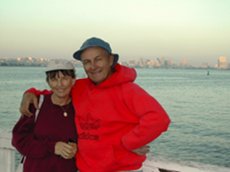 According to Louise Torio, Vice-president and chair of the Congress of History Awards Committee, “The Media Award is intended for professional and commercial media or for those who work for such media such as newspapers, magazines, radio, television, publishing, or other communication media.” Cowen made the presentation to Diana Lindsay who in turn praised the work of the organization in bringing greater awareness of the region’s rich historical heritage.

Sunbelt Publications publishes and/or distributes regional books focusing on various aspects of anthropology, biology, botany, archaeology, geography, geology, history, and recreation of southern California, Baja California, Mexico, the deserts of the southwest, and books written for children. Sunbelt supports the works of local authors and has succeeded in finding a niche market for those authors who write of local happenings. Sunbelt also encourages its authors to speak to organizations that have an interest in the history of our region. Sunbelt Publications is an award winning press that has been in operation since 1984.

The Congress of History is a non-profit networking organization that brings together representatives of historical organizations, groups, museums, and historical archives in California's San Diego and Imperial Counties. The organization provides unity and coordinates the educational efforts of member organizations interested in promoting a greater awareness of the history of San Diego and Imperial Counties and outlying regions among its members and the general public. Meetings are six times a year and an annual conference is held in March. Information about the organization can be found at www.congressofhistory.org.

This recent recognition is the second major award that Sunbelt Publications has received in the last five months. In October 2012 the international Association of Earth Science Editors presented their “Outstanding Editorial or Publishing Contributions” award to Sunbelt Publications at their annual conference this past year held in San Diego. The award is not given every year. The association stipulates that the award be given only to those who meet the rigorous requirements set forth by the association. According to the association, “the purpose of the Award is to recognize truly outstanding contributions and achievements in editing or publishing that stimulate new or greatly improved accomplishments in teaching, research, and applications in the field of earth science.”

They deserve this award!   I have one of their books (The Anza-Borrego Desert Region) and wouldn't go out to the desert without it.