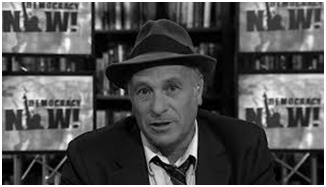 January 9, 2016 (San Diego)—Greg Palast, one of the most celebrated investigative journalists on the planet, is coming to San Diego for  a fundraising meet and greet for KNSJ  radio, the Network for Social Justice, on Sunday, January 10th at 6 p.m.  He’ll share results of his investigation into the “theft of the 2016 election and the billionaires behind it.”

The Chicago Tribune said of Palast, “What a journalist should be:  a truth hound, undaunted by power.”  San Diego news anchor Bree Walker called Palast “The best damn reporter in the USA.  Period.”  Britain’s Guardian called him “The most important journalism of our time.” Palast has broken front-page stories for BBC Television Newsnight, The Guardian, Nation Magazine, Rolling Stone and Harper's Magazine.

His books have been translated into two dozen languages and has led investigations of multi-billion-dollar frauds in the oil, nuclear, power and finance industries for governments on three continents, and he is the author of Democracy and Regulation, a seminal treatise on energy corporations and government control, commissioned by the United Nations and based on his lectures at Cambridge University and the University of São Paulo.

Palast has spoken previously in San Diego on several occasions, typically drawing full houses. He is known for his sardonic wit and entertaining speaking style when discussing issues of national importance backed up by rock-solid fact checking pursued with the diligence of a bloodhound on the trail.