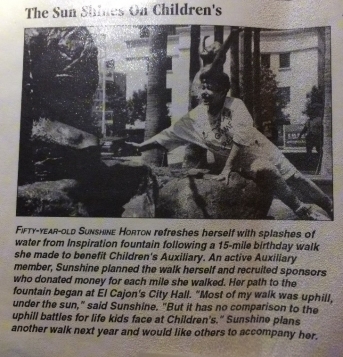 “For my 50th birthday I wanted to thank this country for giving me such a great life and I wanted to do something special, so I went to the Sheriff’s Department and they told me to do a walk.

“Most of my walk was uphill, under the sun,” Sunshine said of her 15-mile walk, “But it has no comparison to the uphill battles for life kids face at Children’s.”

This year, instead of doing an event on her own birthday, Sunshine is hosting a dinner on her daughter’s birthday on September 10 at Downtown Café for $20 which includes dinner, wine or beer, music and dancing, and is also raising money for Children’s Hospital via GoFundMe.

Her daughter died in 2012 of cancer and since then Sunshine’s fundraising efforts have been dedicated to the cancer patients at Rady Children’s Hospital.

“My daughter was giving, caring. She was very smart and she loved to be around kids. She cooked very good from scratch and she knew how to sew clothes really well.”

Sunshine has shaved her head 17 times for charity and held walks, dance marathons and dinners. 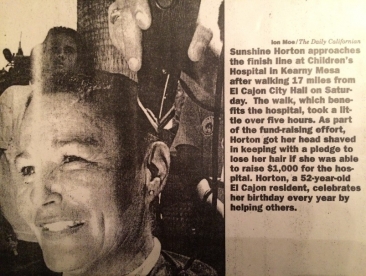 “I’ve been working in that hospital as a volunteer since that hospital was on Frost Street, it was a little tiny hospital. They do miracles for kids.”

She adds, “Let’s say you live in Temecula and you can’t drive back and forth every day they put you up across the street in the Ronald McDonald house with a tv and they even cook for you.”

For Sunshine’s 63rd Birthday she danced 21 hours straight to raise awareness about not drinking and driving and held an opportunity drawing to benefit the hospital.

Today is Sunshine’s 22nd Miracle Maker Birthday for Children’s Hospital. “Can you imagine I’m going to be 72? I don’t know if I look it but I don’t feel it.” 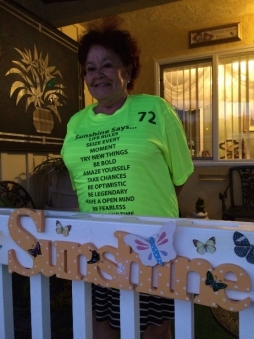 Although Sunshine won’t be shaving her head this year or doing a 15-mile walk, she still hopes lots of people will donate for the cancer patients at Children’s Hospital. “If just one third of the people in the county donate $1, that’s over a million dollars!” she said at Tuesday’s El Cajon City Council meeting. You can donate at https://www.gofundme.com/sunshines-22nd-miracle-maker.