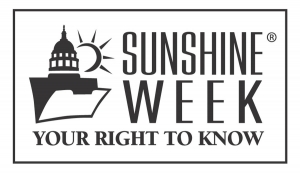 March 21, 2014 (San Diego) - This week is Sunshine Week, shining a light on open government—or the lack of it.

Now, San Diego Councilmembers Marti Emerald and David Alvarez, along with Californians Aware are proposing open government guarantees be added to the city charter, the first known such action in the state.

Emerald and Alvarez are asking Council to put the measure on the November ballot for voters to approve.

The initial proposal, made in mid-February by Alvarez and CalAware President Donna Frye (a former council member herself), called for public access to records of city contractors. It also required that any withholding of public records not mandated by state or federal law be  authorized  as an exemption from the California Public Records Act but also justified by substantial evidence of necessity to protect the public interest.

That version was unanimously forwarded to the council by a policy committee, but council voted to send it back to committee after city attorney Jan Goldsmith said such a charter change could invite litigation.

Since then controversial developments have led the authors to broaden the proposal even further.

The collapse of efforts by a  nonprofit committee charged with organizing a centennial celebration for the city’s historic Balboa Park drew outrage after the committee’s officials insisting that their records were not subject to the Public Records Act.  Although a wave of public criticism prompted them to relent and provide all records to the city, the issue led to an addition to the proposal to make records of any work done for the city by contractors or others subject to access by city officials and  the public.

Interim Mayor Todd Gloria unexpectedly announced that all emails over one year old would soon be destroyed, drawing criticism from open government advocates.  Although the new mayor Kevin Falcouner cancelled that order,  it led to addition of yet another  new provision requiring preservation of all city records for at least two years, which is the same requirement the state maintains for its records.

IN addition,  the proposal would require that the email records of any communication regarding city business by municipal employees, elected officials or agents must be filed on or copied to city servers. That comes in response to the practice of using private email accounts for official processes, as some officials seek to dodge public disclosure requirements.

The result is perhaps the strictest attempt known yet to use local rules to open government to public scrutiny—and if voters approve the measure, no elected officials in the future will be able to subvert the public’s right to access public records.

Calaware General Council Terry Francke concludes,  “If you don’t want the paper trail of public accountability to vanish in a year, or stay hidden in the private files of a city contractor, or be channeled out of sight in officials’ private emails, you need charter language that says so and can’t be changed at the whim of the next city council that doesn’t like the sunshine.”