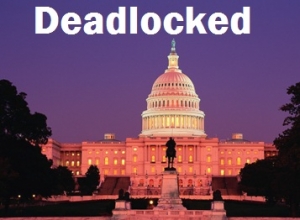 November 23, 2011 (Washington D.C.) – The Congressional budtet “super committee” charged with reducing the deficit by $1.2 trillion over the next 10 years failed to reach a deal by Monday's deadline. This sets in motion triggers forcing automatic deep cuts starting January 2013 in Defense spending and social programs including Medicare, Social Security, veterans’ benefits and food stamps.

The six Republicans on the 12-member committee demanded spending cuts in domestic programs listed above and sought to extend Bush tax cuts. Democrats wanted to raise taxes on millionaires, minimize cuts to social programs and add stimulus spending aimed at creating jobs while off-setting costs with savings from ending the Iraq War.

Commitee Co-Chairs Sen. Patty Murray (D-Wash.) and Rep. Jeb Hensarling (R-Texas) issued a statement expressing deep disappointment but stressed that "We end this process united in our belief that the nation's fiscal crisis must be address and that we cannot leave it for the next generation."

According to Senate Majority Leader Harry Reid (D-Nev.), “Democrats were prepared to strike a grand bargain that would make painful cuts while asking millionaires to pay their fair share, but Republicans were never came close to meeting us halfway.”

Reid’s Senate counterpart, Minority Leader Mitch McConnell (R-Kent.) countered by saying, “an agreement proved impossible…because Democrats would not accept any proposal that did not expand the size and scope of government or punish job creators.”

The question of taxing millionaires has been a hot topic of late. Republicans have been steadfast in refusing to raise taxes on anyone; however, according a recent CBS News poll, nearly 64 percent of Americans believe that millionaires should be taxed more.

The super committee’s failure to reach an agreement is a microcosm of the entire political system’s partisan divide. Republicans on the panel looked to balance the budget though a cuts only technique, refusing to budge on raising taxes while also looking to slash Medicare substantially. Democrats on the other hand hoped to implement a budgetary plan that implemented both tax increases and spending cuts.

“We got totally hung up by people who were insisting that not only could they not raise any additional revenue from the wealthiest people in the world, but they wanted to give them an additional tax cut. This is insanity,” Democratic Senator John Kerry said, according to CNN.

The committee’s failure will mean that painful mandatory cuts to defense and discretionary spending will be implemented in 2013; however, many are hopeful that with the time until then the Congress will take action to undo the cuts (an unlikely possibility, as 2012 marks an election year).

"I will be introducing legislation in the coming days to prevent cuts that will do catastrophic damage to our men and women in uniform and our national security," Rep. Howard P. "Buck" McKeon (R-Santa Clarita), chairman of the Armed Services Committee. "Our military has already contributed nearly half a trillion to deficit reduction."

President Obama has made it clear that he plans to veto any plan to undo the $1 trillion in automatic cuts stating, “One way or another, we will be trimming the deficit by at least $2.2 trillion over the next 10 years…We need to keep the pressure up to compromise, not turn off the pressure.” The automatic cuts would be split between defense spending and domestic national spending, the department of defense would see a 10 percent hit to their budget while domestic spending would see about an 8 percent cut.

Sen. Joe Lieberman (I-Conn.) has called for a “bipartisan rebellion” in Congress to strike a debt deal in the wake of the super committee failure. Liberman points to the fact that three deficit reduction plans have been proposed, and he is calling for a vote on the Senate floor before the end of this year. “We need to show that elected officials in Washington are capable of protecting the economic future of the American people,” said Lieberman.

According to CNN, the plans referenced by Lieberman were all proposed by bipartisan groups that called for a comprehensive package of spending cuts, revenue increases, and reforms to Medicare and Social Security.

New York Mayor Michael Bloomberg, an independent, called on Congressional Republicans to break no-new tax pledges, stating that a combination of spending cuts and revenue increases will be needed to solve the deficit.  “You have to do both, and I don’t care what you promise your constituents…Those are the facts,” he said.

A handful of Republicans have broken with their party’s no-new-taxes stance and backed a compromise measure that would have brought in $400 billion in increased revenue. But the vast majority, including San Diego’s GOP representatives, have stood firm against any revenue increases.

The DOW dropped some 250 points on news of the super committee’s deadlock.

Business Insider concluded that “Congress proved itself unworthy of even its single-digit approval rating — already an historic low.”