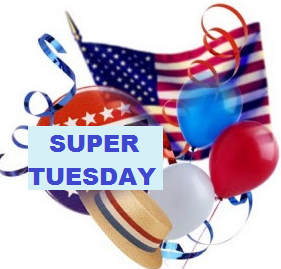 March 2, 2016 (San Diego) –Former Secretary of State Hillary Clinton and businessman Donald Trump strengthened their positions as frontrunners in the Democratic and Republican presidential race, each scoring wins in seven out of twelve states that held primaries or caucuses yesterday.

Vermont Democratic Senator Bernie Sanders also picked up four key wins (Colorado, Minnesota, his home state of Vermont and Oklahoma, a conservative state) , leaving the door open for an upset on the Democratic side-- but only if he can produce landslides across the west and  populous states that have not yet cast ballots.

Currently Clinton has 1,055 delegates amassed to Sanders’ 418, according to CNN.  It takes 2,383 delegates to win the Democratic nomination. She swept the south, picking up Texas, Georgia, Alabama, Arkansas, Virginia and Tennessee, as well as Massachusetts, a liberal plum in the northeast. Clinton did particularly well with black voters in the south, but the question remains whether her lead can hold in areas with larger white or Hispanic populations.

Sanders, though viewed by many analysts as a longshot, surprised some with his wins in conservative Oklahoma and in Colorado, both swing states. He is motivating young people and drawing huge crowds that could bode well for Democratic voter turnout if he wins.

Both Sanders and Trump have defied expectations, repeatedly doing better than the pundits have predicted.

On the Republican side, Trump trounced his opponents in all of the southern states voting Tuesday except Texas. He also won in Massachusetts and Vermont.

Cruz won his home state of Texas, along with Oklahoma and Alaska’s Republican caucus. Rubio scored his first win in Minnesota.

According to CNN estimates, Trump now has a total of 315 delegates, while Cruz has 205 and Rubio 107. In the Republican primary, just 1,237 delegates are needed to win.   Two other GOP candidates, neurosurgeon Ben Carson and Ohio Governor John Kasich, remain in the race but have not won a single primary.

Meanwhile a new CNN/ORC poll show that both Clinton and Sanders would beat Trump in a general election, but that Clinton would lose to Rubio or Cruz.  Those results may give voters in upcoming states pause to reassess the party frontrunners.

Trump’s string of victories has many Republican leaders  “desperate” to halt his candidacy, according to an Associated Press headline after Super Tuesday.  Some are speaking out to denounce Trump for refusing to denounce white supremacist and Ku Klux Klan leader David Duke, who is backing his campaign.

Republican Senate Leader Mitch McConnell stated, "Senate Republicans condemn David Duke, the KKK, and his racism.” Noting Trump’s “seeming ambivalence about David Duke and the KKK, so let me make it perfectly clear," he said. "That is not the view of Republicans who have been elected to the United States Senate, and I condemn his views in the most forceful way."

House Speaker Paul Ryan also spoke out, stating, "If a person wants to be the nominee of the Republican Party, there can be no evasion and no games. They must reject any group or cause that is built on bigotry.”

Conservative commentator Joe Scarborough called Trump’s action “disqualifying” after Trump claimed he didn’t know who David Duke was and told a news interviewer he would have to research the KKK further.

Trump picked up the endorsement of New Jersey Governor Chris Christie, who dropped his own presidential bid. Six newspapers owned by Gannett News Service in New Jersey responded by publishing editorials calling on Christie to resign, stating of their prior endorsement of his candidacy, “Boy, were we wrong.”

Republicans’ chances of stopping Trump may hinge on a brokered convention if he does not win a clear majority of delegates.  There is talk of releasing pledged delegates on the convention floor to vote for other candidates, though it’s far from clear whether Trump loyalists would abandon their candidate even then.  Some have talked about a party heavyweight such as former Presidential nominee Mitt Romney jumping into the fray as an alternative more might rally around.

There’s also potential for a third party run.  Independent Jesse Ventura, former World Wrestling champion and ex-Minnesota Governor, announced this week that he will launch an independent run for the presidency if the contest comes down to Trump vs. Clinton.

The ever-flamboyant Ventura told the Daily Beast, “See, I’m an independent and I despise the two parties,” Ventura, who speaks as if he is prepared to tackle you, continued. “I love what Trump’s doing to the Republicans. He’s got them in complete disarray. In fact, it looks like the WWE when you watch their debates.”

In most recent elections, the presidential nominees have been decided long before voters in California head to the polls.  But this year,  if the primaries are not yet sewn up when Californians cast votes on June 7th California, with 546 Democratic delegates and 172 Republican delegates, could prove a kingmaker.