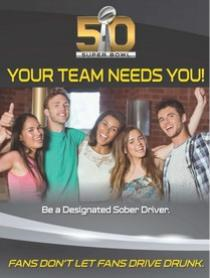 Watch for increased DUI patrols by Sheriff's Deputies across the county beginning on Sunday, February 7 at 3:00 p.m. and lasting through 5:00 a.m. Monday.

The Sheriff's Department's goal is to remove impaired drivers from roadways and prevent crashes that can cause serious injury or death.

Last year, the Sheriff's Department arrested 1,516 people for driving under the influence.

Sheriff Bill Gore says, "Super Bowl Sunday should be a fun and safe time, on and off the gridiron. Do the responsible thing: don't drink and drive. Buzzed Driving Is Drunk Driving."

The Sheriff's Department has these tips for a safe Super Bowl Sunday:

• Plan a safe way home before the game begins

• Before drinking, designate a sober driver and leave your car keys at

• If you're impaired, use a taxi, ride sharing service, call a sober friend or family member or use public transportation

• If you see an impaired driver on the road, call 9-1-1 immediately