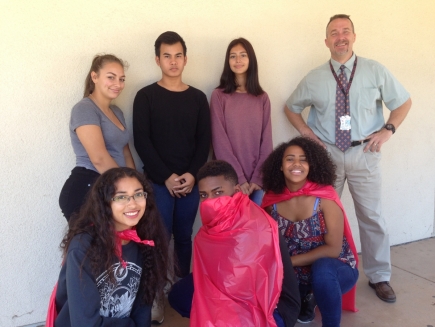 October 1, 2016 (Spring Valley) -- In the world of fictional superheroes, Ironman’s alter-ego is Tony Stark, a business-minded intellectual and ingenious engineer.  It fits the theme of what East County Youth Coalition (ECYC) members at Mt. Miguel High School are stressing for their school’s superhero-themed homecoming. The teens are pressing adults to use their intellects to stop providing alcohol to minors.

“Superheroes save lives, not put them at risk,” said William Robinson, a junior and third year member of ECYC. “Not everyone has to wear a cape to be a superhero. Things like not letting minors drink at a party makes you a superhero.”   The students will spread that message at the homecoming football game on October 7. Clad in capes, members of ECYC will pass out flyers highlighting the dangers of offering alcohol to minors. 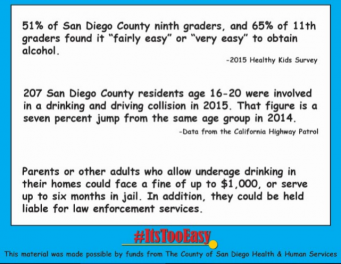 “Adults are providing teens with something dangerous instead of being a parental figure that should know better,” said Sabrina Martinez, a junior and second year member of ECYC.

Not only does underage drinking put teens at risk, those providing the alcohol can face consequences for breaking the law.

Under current social host legislation, parents or other adults who allow underage drinking in their homes could face a fine of up to $1,000, or serve up to six months in jail. In addition, they could be held liable for law enforcement services.

Recent data suggests it’s easy for kids to get alcohol. According to the 2015 Healthy Kids Survey, 51 percent of San Diego County ninth graders, and 65 percent of 11th graders found it “fairly easy” or “very easy” to obtain alcohol.

“Don’t allow us to drink,” said Desiree Robinson, a junior at Mt. Miguel High School. “You may think it will make you the cool parent, but you’re putting our future in jeopardy.”

ECYC members are not only cautioning adults that it’s too easy for teens to access alcohol, they’re telling fellow students that underage drinking is not only dangerous, it’s deadly.

“Teenage drivers are already at a higher risk of car crashes because we’re inexperienced, said Martinez. “Adding alcohol to the mix only makes the situation more dangerous.”

Data from the California Highway Patrol shows 207 San Diego County residents age 16-20 were involved in a drinking and driving collision in 2015. That figure is a seven percent jump from the same age group in 2014.

While many students and alumni will take part in homecoming festivities, ECYC members want everyone in attendance, adults and students alike, to do so without alcohol.

Great job by the students at Mount Miguel's Matador ECYC to share important information with their classmates and community. It very well may help to save lives.