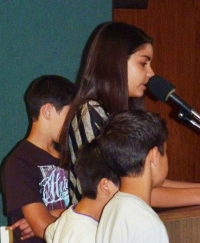 But Board President Robert Shield made clear that Alpine’s new high school still faces considerable hurdles. “I have very serious concerns about operational costs,” he said. “I cannot in good conscience vote to increase our fixed costs,” he said, adding that a future vote on construction bidding will likely face stiff opposition from him. “As long as teachers face layoffs and class sizes are bigger, I could not support money to build a new high school.”

Schreiber, the only board member showing solidarity with Alpine by wearing a yellow “I want my high school” sticker, criticized the Board f 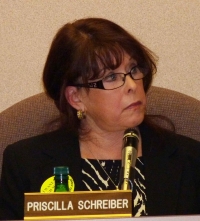 “Shame on this board,” she said during the discussion period. “We did not manage the operational funds across the board to make sure we would have funds to build a high school.” At one point during the meeting, trustees Jim Kelly and Robert Sheild indicated they were prepared to support the Superintendent’s proposal to delay construction bidding, but eventually backed down after hearing evidence that such bidding was effectively delayed 12 to 18 months anyhow due to time constraints of the design review process.

Alpine voters twice approved bond measures that allocated funds for school construction projects, including a high school for Alpine. That measure approved funds to acquire the land but contains a provision that the district must proceed with construction if a district-wide enrollment threshold is met. 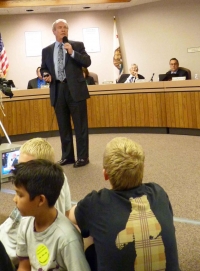 “We are facing horribly difficult decisions,” said Swenson, citing teacher layoffs and class sizes that have swelled to 37 pupils. The district is in its fourth year of budget cuts fueled largely by a state budget that has slashed per-student spending sharply. Governor Brown has said those rates will fall even farther if a ballot initiative to extend taxes should fail. 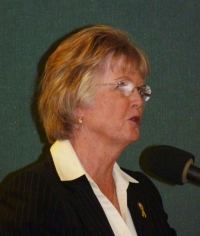 Supervisor Dianne Jacob chastised the board and noted that the County has partnered with the district on many expenditures such as sports fields for district campuses. To delay a new campus for Alpine “would break faith with the community of Alpine and with me,” she said emphatically. “No less than the public trust is at stake here—and the public doesn’t need any more reason to distrust government.”

She added that authorizing construction would be fiscally responsible due to the cost of construction costs being lower during a recession than later on. “I’m here to gently remind you that a promise is a promise,” she concluded. 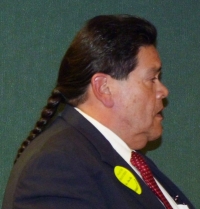 Robert “Cita” Welch, Jr., Vice Chairman of the Viejas tribal council, noted that the tribe has also provided financial support and partnered with the District. He called on the Board to “do the right thing” to maintain mutual respect and trust, adding that support for Alpine’s high school has prompted “unity like I have rarely seen before” in the community. He added that Sycuan tribal Chairman Daniel Tucker, who is out of town, also supports building the Alpine High School.

The Viejas tribal council voted unanimously to support a resolution in favor of building the district’s 12th high school in Alpine and including students from Blossom Valley as well as Alpine. That resolution has also been signed by numerous other community groups, hundreds of parents, and the Alpine School District.

Former GUHSD board member Larry Urdahl testified that Alpine residents have spent 20 years fighting to get a high school built and helped raise over $800 million. “Alpine poured their heart and soul into getting the bond passed for their kids,” he said.

Among the most compelling testimony came from students themselves. 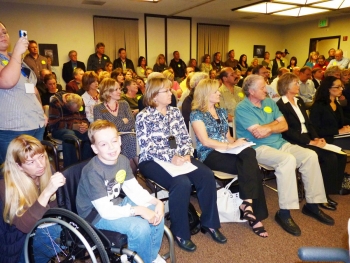 Markowitz, the 12-year-old Alpine middle school student, cited grim statistics of Alpine students killed driving to distant schools for athletics or other activities, also noting that the “magic” of growing up in Alpine “ends when we are teenagers” because friends become separated, forced to travel long distances to multiple different schools.

A young boy in a wheelchair said, “I have to sit in my wheelchair all day, and I can’t imagine sitting in a school bus for another four hours. People voted for this high school. I thought when people voted for something, it should happen.”

Not everyone supports building the new school at the present time.

Karen Fleck testified that she has been asked unanimously by the boards of all PTAs in the Grossmont district to state, “We’re opposed to a 12th high school right now.” She said utilities, arts and athletics needs are already not being met at other schools in the district. “We need more resources for existing schools in our district,” she said, adding that she did not oppose buying land or creating a design (costs funded by the bond measure) but did not want to see construction approved.

The crowd booed, and Board Chairman Robert Shield threatened to call a recess if respect was not shown to all speakers.

Mendy Brant agreed that postponing construction should be done to avoid leaving other kids “in inadequate and unsafe facilities” and minimize the number of paycuts and teacher layoffs needed.

But others attested that building the new school would actually ease overcrowding at existing schools such as Granite hills, where many Alpine students now go.

George Barnett said the school would actually be a “positive” for the district that could actually generate a net increase in funds by in average daily attendance (ADA) money that the district is losing out on now to students going to charter schools (including Steele Canyon), homeschooling, or online education options.

Albert Haven presented the Alpine Resolution and said the real issue is that the district built high schools for 1800 kids, but enrollment has swelled to 2700. A new Alpine campus would be build for 800 kids but could be built out to accommodate 1600, easing overcrowding at other schools. “It’s time for the guests to go home,” he said.

Sal Cassamassima gave a slideshow presentation arguing for construction and claimed the district relied on faulty numbers to draw some of its conclusions. Cassamassima concluded that the new school would generate a positive cash flow of $600,000 to the district, including transportation savings on school busing, increased ADA money, and more.

He invoked the spirit of Ronald Reagan, who he recalled as a “man of his word” and added, “A bond is a commitment, an irrevocable duty.”

He proposed seven points. In the end, six were adopted—but the seventh and most controversial point calling for a delay in construction bids was deleted. Other points approved include creating a boundary study committee to be headed by Doug Deane, continuing with property acquisitions, submitting site preparation plans to the DSA, completing revision of a strategic plan, dedicating funds allocated for the high school so that they could not be used for anything else, and developing a strategy to increase district enrollment.

“This is a victory for the people of Alpine,” Supervisor Jacob said. “The board voted unanimously to get this project shovel ready. That will probably take a year and a half to two years, which allows time to review a boundary study for the district.”

Viejas Vice Chairman Welch expressed satisfaction with the result. “It keeps it moving forward,” he said.

Former GUHSD board member Urdahl voiced skepticism over the Board’s long-term intentions, however. “The only way the high school will be built is to change the complexity of this board, or to unify—become a unified district with Alpine School District,” he said, adding that the latter step would cost the GUHSD around $50 million—far more than the cost of building and operating a 12th high school campus in Alpine.