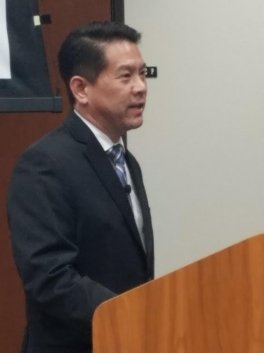 May 6, 2019 (El Cajon) – Cajon Valley Union School District Superintendent David Miyashiro, Ed.D., sent a blistering editorial in an e-mail to East County Magazine, board members and others blasting our article on board President Tamara Otero’s failure to disclose that her son owned a company that received a $665,000 contract.   He did not list any actions planned to address Otero’s lack of disclosure and transparency.

ECM stands by our story; our response is listed below the Superintendent’s remarks, published in full below:

My colleagues and I at the Cajon Valley Union School District read Paul Kruze’s confused April 30th article on our school district.  Although we prefer to remain focused on our mission of educating and preparing our children for the future, the readers of the East County Magazine deserve a proper recitation of the crystal clear facts.

Cajon Valley Union School District followed a fair, impartial, transparent, and legally compliant competitive bid selection process.  Our Board of Trustees in no way influenced that process or the recommendation from professional district staff to award a competitively bid contract to Otero Construction.  The Board approved the recommended bid on a 4-0 vote, with Trustee Tamara Otero appropriately declining to vote on the item.  Allegations made by a losing bidder, Handy Industrial, are unsubstantiated, procedurally infeasible, and self-serving.  It is, perhaps, for this reason that Handy Industrial had five days to contest the bidding process and did not do so.

In light of these facts, we feel that it is highly improper to publish frivolous and spurious allegations about Cajon Valley Union School District, allegations whose only possible purpose would be to unfairly and incorrectly impugn the integrity of our district and its processes and to distract our school district from serving 17,500 students, across 27 schools, as best as we can with a mission of ‘Happy kids, healthy relationships, on a path to gainful employment.’

There is nothing “confused” about the article, which is accurate and well documented.

Mrs. Otero did abstain, but only after the discussion on her son’s company.  State law requires that board members step out of the room and recuse themselves when there is a potential conflict of interest and also that they disclose the reason.

Even when asked about a family relationship, Mrs. Otero deceptively failed to disclose that this was her son’s company, nor his ties to the company owned by his father, who was convicted of defrauding the federal government. These are serious concerns that the public has a right to know about, and draw their own conclusions on the ethics.

Handy Industrial had only five days after the bidding process closed to contest the bid.  The owner stated that he did not know that Otero Construction was owned by a board member’s son until substantially after that five- day window had closed.

Our intent is not to impugn the integrity of the district, but merely to report the facts, as well as the concerns raised by Handy.

We stand by our story.

I am a strong critic of anything that stands in the way of fair and open practices by "paid" public servants, and I emphasize "servants". Could not attend the meeting however I see nothing that ECM has to do or say to defend the dialog published. In fact, David Miyashiro, Ph.D appears to be asserting his background and influence to attack rather than resolve loose ends in the District. ECM is a strong and representative part of our community and I encourage that publication to continue to stand by their code of ethics and openly report anything that affects our schools, students and open government. God bless the founders, Constitution and system that continues to serve us and make us great. Barry A. Treahy
Keep digging East County Magazine, you are beginning to discover that this district suffers from extreme corruption and fiscal improprieties. The superintendent's personal friend (he acted as a groomsman in his wedding in 2008) has started 4 plus companies that have been employed by the district at a hefty price, since Miyashiro was hired in 2013.
Kudos to this editor and magazine. Strong and wordy counter comments by the bureaucracy just embeds a stronger public view and understanding, that our administrators of schools as well as teachers (exclusive of Unions) must maintain open and fair guidance to maintain public trust..
David Miyashiro appears to be loyal to his colleagues. I stand by Paul & Miriam.