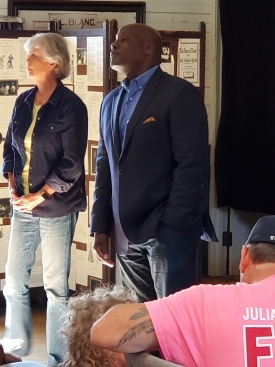 November 7, 2019 (Julian) -- Supervisor Dianne Jacob ventured into a potential firestorm when she held a scheduled town hall forum at the Julian Town Hall on October 25th in downtown Julian. Jacob’s town hall coincided with the anniversary week for the infamous 2003 Cedar Fire and 2007 Witch Creek firestorms which devastated the eastern San Diego backcountry. Up to then, both were the two worst wildfires in California history.

But the irony didn’t stop there. Moments before the town hall was set to begin, word reached the venue that a brush fire erupted near Witch Creek between Ramona and Julian. This prompted County Fire Authority/Cal Fire Chief Tony Mecham to bolt out of the town hall where he was slated to speak in order to respond to the fast-moving fire.

“We are all on edge,” acknowledged Jacob, who chairs the county’s Unified Fire Council and outlined major investments made by the county to improve fire safety. “But we are better prepared than ever before.”

That contention, however, was disputed by the president of the former Julian-Cuyamaca Fire Protection District (JCFD)'s  board of directors, as multiple fire engines and an ambulance roared past the town hall en route to the Sawday Fire in Ramona. 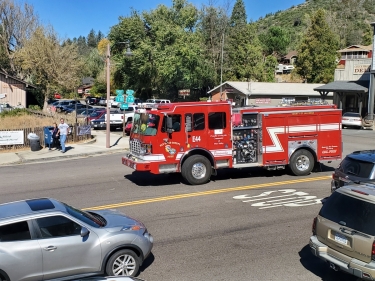 The County’s consolidation of fire resources led to the recent dissolution of the all-volunteer Julian-Cuyamaca Fire Protection District, with the County Fire Authority/Cal Fire taking over firefighting and medical responsibilities – a decision that has sparked controversy. Though some residents have been vocal in opposing those actions, local residents were generally amiable throughout the event.

Throughout the meeting, Jacob, along with East County Magazine’s editor Miriam Raftery, who operates the East County Wildfire and Emergency Alerts, updated the town hall audience on the progress of the Ramona “Sawday Fire” which spread to 97 acres. Several residents left the meeting as the fire progressed, when State Highway 78 was closed in both directions for several hours.

Jacob noted that the county has done controlled burns and fire breaks following through on an all-encompassing fire prevention and control initiative which was announced in mid-May. “The County is not just sitting back on its laurels,” she said. She stated that the County has contracted with a fleet of DC 10 firefighting aircraft but acknowledged that a dry weather forecast into December is “historic” adding, “Pray that we get some rain.”

But she criticized SDG&E over its power shut-offs, which the utiity has done during windy conditions to prevent its lines from sparking fires “I’ve witnessed [electricity] shutoffs with little or no wind,” Jacob stated.

She said that two-thirds of East County is dependent on wells for drinking water. When the power is off there is no water for residents or fighting fires.

One way to mitigate the unintended consequences of the public safety electricity shutoffs would be for San Diego Gas & Electric (SDG&E) to provide portable generators, but Jacob observed, “It’s all about the money.” 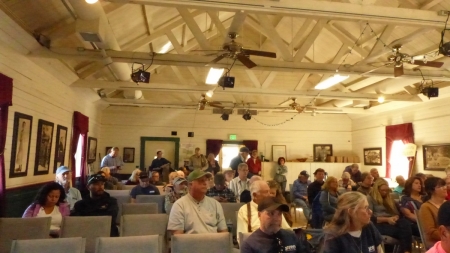 She noted that most fires are caused by humans, not necessarily powerlines, “but people doing dumb stuff” during high wind events. She recalled that SDG&E was responsible for three of the big firestorms, according to state regulators. “They should invest heavily in making all equipment fire safe – change poles, widen space on lines,” Jacob said. “According to their own report, that job will not be done until 2027.” She called that timetable “irresponsible.”

SDG&E has been lauded for many of its efforts to minimize wind-related fires. As noted by the San Jose Mercury News, it has cited the utility’s advanced fire monitoring as well as its move to bury 10,000 miles of power lines; to replace 18,000 wooden electric poles with safer steel poles; and to update its power grid to make it much more sophisticated, allowing it to “surgically” cut power to a limited number of homes and avoid mass power outages to millions of ratepayers, as Pacific Gas & Electric customers in northern California have endured.

Photo, left, by Miriam Raftery:  Audience members at Julian Town Hall; many seats were emptied as residents rushed home after hearing news of the Sawday Fire prompting evacuations and threatening homes between Ramona and Julian

Jacob acknowledged that SDG&E has done more than other utilities, but she has not been afraid to openly criticize SDG&E, contending that the company’s actions are still not enough.

“The PUC (Public Utilities Commission) today just approved another fire fee on bills – why should we have to pay for it?” To SDG&E she asked, “If you’ve done such a good job then why are you shutting power off?” During the recent Santa Ana winds, the utility turned off electricity to tens of thousands of residents countywide, including the Julian area. 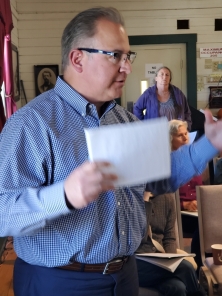 SDG&E recently announced that it is about to embark on an initiative called “Fire Safe 3.0.”

The earlier versions of SDG&E “Fire Safe” utilizes the company’s wide network of weather stations to report wind, temperature and humidity readings taken every 10 minutes throughout East County to predict when atmospheric conditions for catastrophic fire may come about. SDG&E has hired five  meteorologists and buried 60 percent (10,000 miles) of its power lines underground.

A “new and improved” protocol which beefs up its fire analytics even more will be put in place, which uses weather station data gathered every 30 seconds. SDG&E also employs artificial intelligence-based predictive models to improve the accuracy of its forecasts. This weather awareness system may be accessed via the internet at https://sdgeweather.com

Of note,  SDG&E's weather station is what provided the first alert of the Sawday Fire to fire officials, according to SDG&E, helping assure an early coordinated response. The utility also has its own firefighting team included an air crane that has helped combat numerous local fires.

Mitchell said that the entire state of California “is on high alert” since the 2007 firestorms which he called “a rude awakening for us.” He said that before the Witch Creek fire, SDG&E had never studied fire science as a part of its service to customers. “This began a journey which has resulted in us doing things differently than any power utility in the country.”

The old standard for power utilities was that power lines must withstand wind speeds at 55 miles an hour. As a part of its rebuild, the utility now uses the standard of 85-to-100 miles per hour, which is used in areas prone to hurricanes.

“We are trying to get state funds for a wire-down strategy,” Mitchell said. “If a wire breaks power would be shut off to the line….When the winds blow at 85 miles per hour – the brush, tumbleweeds blow into the lines. It’s not just the lines which are the problems, it’s what’s around them,” Mitchell explained.

Jacob chimed in to voice support for waiving environmental regulations to allow this to occur faster.

Several residents spoke up on the need for generators, which are costly One Majestic Pines resident said letters seeking help to buy a generator for homes with water tanks have thus far not attained such help. Another resident chided SDG&E, “You picked the wrong day to come here.”  A suggestion was also made to consider a microgrid, such as Borrego Springs now has, to power the community even when SDG&E shuts off power. Brian Crouch, the former JCFPD Battalion Chief, was instrumental in building the Borrego grid.

Julian at risk during Sawday Fire 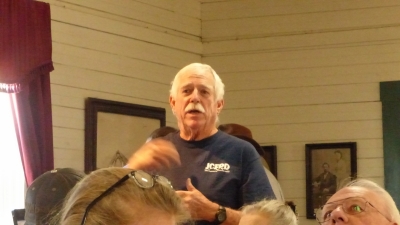 Near the end of the meeting, the ongoing struggle between the County of San Diego and the Julian Fire Protection District (JCFPD) came up in an exchange which took place between Mike Menghini, president of the former JCFPD board, and Jacob. Several times during the meeting, the wail of sirens on fire engines could be heard passing by the Julian Town Hall, heading towards the Sawday fire some 35 miles west.

“Cal Fire’s equipment is all down the hill to fight the fire. If a house fire starts in Julian, we’re sunk,” Menghini stated. (Photo, right, by Miriam Raftery) “We’re ready and we’re closed to everybody,” he added, a reference to the fact that prior to the county dissolving the JCFPD, volunteer firefighters were available to respond to fires either as first responders or backup when Cal Fire was dispatched elsewhere. “The County should reconsider what it’s doing to us. I feel way less protected than I did before!” he concluded, evoking loud applause from the audience members still left in the room.

No one disputed the JCFPD board president's statement on Julian being left without firefighting resources during the Sawday Fire. ECM’s Paul Kruze took several photos out the townhall window of equipment racing to that fire. ECM later e-mailed Cal Fire’s public information officer Issac Sanchez to ask what steps will be taken to prevent Julian from being left bare of firefighting resources in future wildland fires, and he has not responded.

At the townhall, Jacob said, “You’ve had great volunteers,” referring to the former JCFPD firefighters and paramedics as “unsung heroes.” She reminded the audience that she had supported the future of the fire department going to a vote.

Menghini called the vote that dissolved the JCFPD “a farce” and said that had the measure had been on the ballot “the correct way we’d have won.” The measure passed in favor by a small margin affirming of the County of San Diego taking over of fire protection and medical services in Julian.

Jacob fielded a question from East County Magazine’s Raftery about the reporting of county response times to fire and medical emergencies by CalFire, noting that there have been anecdotal complaints from some residents of long response times to some incidents since the transition from volunteer firefighters to County control.

“We’ve tried to get the hold of records about response times. Is it better, worse, or the same? How do we get our hands on that?” Raftery inquired, emphasizing the importance of facts to assess the outcome since the transition.

“Facts are good,” Jacob said, adding that she would be “happy” to look at response time records. But she added, “I’m not in charge of the operation. People voted for the transfer from the volunteers to the San Diego County Fire Authority. That’s why the process is in place. I know the bottom line. We approved the money than Julian now gets in an additional a million-and-a-half dollars annually. Which means year around staffing, 24/7. They got a paramedic engine additionally. Paid off the debt for the fire station. On the operational end we can find out. It is still in the court process.” 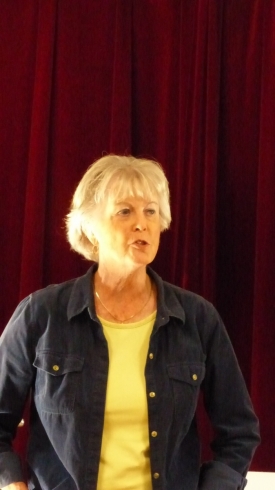 On other issues, Jacob shared information on changes recently made by Supervisors to make it easier to build granny flats. She also praised Supervisors’ recent vote to approve community choice alternatives for residents in the unincorporated parts of the County to build accessory dwelling units, also known as granny flats, to help ease the housing shortage.

She fielded concerns from residents over short-term rentals but said there won’t be regulations unless there are “spoilers” such as large parties generating complaints. She clarified that Airbnb units can only be short-term rentals, not long-term.

Jacob (Photo, left, by Paul Kruze) also discussed her efforts to help those with Alzheimer’s and their families noting that 85,000 county residents have dementia – a number forecast to double by 2030.

An audience member asked for more parking and bathrooms for visitors, as well s increased sewer capacity. “Bring me proposals,” the Supervisor said.

ECM Contributing Editor Paul Kruze asked about the lack of county funding for this year’s Julian Fourth of July Parade. Jacob replied “They’ll be made whole.  We’re going to take care of that.”

Jacob also shared more good news. The Santa Ysabel Nature Center on an 86-acre county preserve is slated to open December 14th. “You’re all invited. This will be the only nature center in the Eastern part of the County,” Jacob said, drawing applause.

Supervisor Jacob was first elected to the Board of Supervisors in 1992. Now serving a seventh consecutive term, she has held elective office longer than anyone in San Diego County government history, representing more than 620,000 residents of District 2, a roughly 2,000-square-mile region that is the largest of the County’s five supervisorial districts.