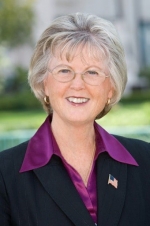 “We encourage Chamber members and members of the public to attend and have the opportunity to hear from this popular County Supervisor,” says Chamber president Mary England.

Cost is $25 for the general public, $15 for members and includes a raffle and $450 attendance drawing for Chamber members.

Supervisor Jacob represents a 2,000 square-mile district that covers most of the eastern two-thirds of the County, stretching from the city of San Diego east to the Imperial County border.

A native San Diegan whose roots run three generations deep, Dianne Jacob was re-elected to the San Diego County Board of Supervisors for a historic sixth term in 2012.