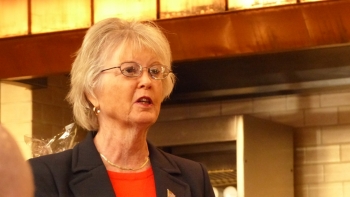 January 30, 2017 (La Mesa) -- La Mesa Chamber of Commerce president Mary England introduced Supervisor Dianne Jacob as a “ferocious fighters” who “doesn’t back down” on issues important to her constituents. Jacob, who was recently named Chair of the Board of Supervisors, spoke at the Chamber’s first meeting of the year, in keeping with an annual tradition.

The Supervisor emphasized her La Mesa roots, from Rolando Elementary to Helix High school.  She’s now seeking a partner to improve the lower ball field at Rolando, where she recalls, “I played a lot of ball there.”

District 2, which Jacob represents, is the largest district geographically, including over 2,000 square miles that encompasses all of East County.  There are 670,00 constituents, of whom 270,000 live in unincorporated areas and the rest in local cities.

Jacob is the longest serving Supervisor in the county’s history. In 2018, there will be two new Supervisors, and in 2020, two more, all stepping down due to term limits—actions that could dramatically change the direction of the board in the future.

“Financial stability will be very important,” Jacob says. To her, that means having enough money for priorities such as keeping neighborhoods safe with adequate law enforcement while also keeping kids out of trouble with places such as libraries, parks and new public trails.

She recalled the changes and challenges the county has faced.  When she was first elected, “the county was on the brink of bankruptcy,” she noted, adding that the region has benefitted from “bold decisions” such as hiring a businessman as the County’s chief financial officer to bring business principles to government.

Future supervisors will be allowed to serve only two terms, or eight years total.  “Term limits in my opinion have not served taxpayers well,” she said, citing fiscal issues faced by the state and the city of San Diego.  She urged voter to pay close attention to who runs for supervisor in the future.

But Jacob told La Mesans, “The city owns the property the police station was on.  The city needed to either build a bigger library, or pay the County for the appraised value.  We received a letter from the city stating that they will pay the appraised value, so it sounds to me like they have decided not to build a new library.” (See the County’s letter to La Mesa and La Mesa’s response to the county)

The Supervisor praised Mayor Mark Arapostathis for work in La Presa and another “tough area” of town with gang activity. “What they’re doing is incredible,” she said of a program to involve parents.

Near La Mesa Middle School, a new Boys and Girls Club and teen center has also improved the area. “Recently I received a half million dollars for a gymnasium project,” Jacob added.

Other accomplishments she’s proud of include rolling back regulations and creating a tiered winery ordinance to help East County grow into a thriving wine region, an example of “how government can actually create an environment conducive for people to do business,” she said, also praising La Mesa’s San Pasqual Winery co-owner Linda McWilliams for her leadership on this effort.  Recently the County made changes to make it easier to serve food at wineries too, she said, enabling food trucks and caterers to provide meals at wineries.

The County is also working to encourage everything from cheese making to distilling spirits. “The primary purpose here is to promote agriculture,” Jacob says, noting there’s growing demand from consumers to know where food comes from and buy local, organic vegetables and grass fed beef “but also get out and enjoy the beauty of our backcountry.”  Next up, she hopes to allow farm stays and bed and breakfast inns at local farms.

She also talked about upcoming expansion at Gillespie Field, which she noted was started by La Mesan George Bailey, her predecessor on the board.  Gillespie Field had been an economic boom that brought jobs and money to the county, proving a “huge asset”.

Jacob will deliver a State of the County address on February 1st at the County Operations Center, where she said she will review a “huge new initiative” related to the Alzheimer’s project that she has spearheaded to help patients and caregivers.

The Chamber also invited guests to its upcoming events including the 9th annual Salute to Local Heroes on Feb. 22 at the Town and Country Hotel’s Golden Ballroom and the Taste of La Mesa event on June 12 in La Mesa.

Dr. David Hornbrook, a La Mesa dentist specializing in dental implant techniques, also spoke to Chamber members. Chamber President Mary England said Dr. Hornbrook is ranked among the top three dentists in the world for   a new approach he pioneered.  He said implants today are a “first line of defense” instead of a last resort for patients who lose teeth, thanks to improved materials that resemble real teeth, more choices in implant sizes and improved success rates.