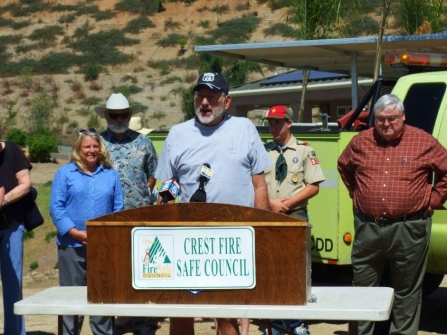 Update: This item was approved by Supervisors on the consent calendar.
By Miriam Raftery
File photo: Crest Fire Safe Council, 2011
October 14, 2019 (Crest) – During the 2003 Cedar Fire that destroyed many homes in Crest, community residents found themselves trapped in gridlock on La Cresta Road, the primary evacuation route. On Tuesday, October 15, Supervisor Dianne Jacob will ask the County Board of Supervisors to approve acquiring easements from landowners over Suncrest Truck Trial as an emergency evacuation route.

“The combination of the community’s location in a high fire hazard severity zone and inadequate evacuation routes creates a significant threat to public safety,” a business impact and advisory board statement written by Jacob states.  “Due to the constant threat of wildfires in the region, the County has been working with the Crest Fire Safe Council, San Miguel Consolidated Fire Protection District, San Diego County Sheriff’s Department and the San Diego County Fire Authority to plan for additional evacuation routes that can be utilized to safely move residents in an emergency.”

Landowners have indicated they are willing to authorize use of the Suncrest Truck Trail for an emergency evacuation route by granting access easements from approximately the 32nd block of Suncrest Blvd. west to the 25th block of Camino Monte Sombra.
Jacob’s proposal would including a finding that acquiring easements for the emergency evacuation route would be exempt from the California Environmental Quality Act (CEQA).  It would authorize the Chief Administrative Officer or designee to negotiate the acquisitions and execute agreements.
The proposal also allocates $35,000 in General Purpose Revenues during the fiscal year 2019-20, using funds included in the operation plan for the County Fire Authority.