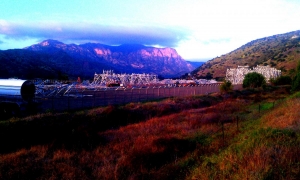 October 19, 2011 (San Diego’s East County) – Residents along the construction route for SDG&E’s Sunrise Powerlink Project have lodged noise complaints with the County. Now Supervisor Dianne Jacob has asked that the County revoke a waiver given that authorized SDG&E to fly on Sundays and a holiday weekend. The Bureau of Land Management (BLM) also granted permission for the extended hours on federal BLM lands.

“It sounds like the Vietnam War zone out here,” bemoaned Lakeside resident Milt Cyphert, a veteran.

SDG&E would not respond to specific questions about residents concerns. However Fritts Golden with Aspen Environmental Group, consultant on the Powerlink project, confirmed that “SDG&E has a variance from the County to work on Sunday 10/16 through Sunday 11/17, as well as the Friday after Thanksgiving Holiday of 11/25/11,” he wrote in an email to ECM and others who inquired.

Catherine Gorka, a breeder of exotic parrots, said she received no advance notice that would have enabled her to cover her aviaries. “Yesterday the helicopters flew all day and my bird is all bloody,” she wrote in an email sent Monday to SDG&E and state regulators. Gorka is already pursuing legal action against SDG&E over deaths of birds she alleges became panicked by helicopter flights, flying into cages and pulling our their own feathers.

Tricia Digenan told ECM that Sunday helicopter flights posed a “huge program” for her elderly mother, Mildred Digenan. “There are SDG&E locks on all the gates,” she told ECM early Sunday, adding that her mother could not access her livestock to feed the animals due to locks placed without warning on gates on her private property. The lock was later removed by SDG&E following a complaint.

Digenan has also expressed distress over a road being built “less than 10 feet in front of our house, over water lines and septic,” to carry a 90,000 pound vehicle. She further alleged that she has seen a helicopter fly a suspended load over her mother’s home—a violation of FAA safety rules, if true.

Louis Russo, Alpine Community Planning Group member, said he saw SDG&E helicopters flying Sunday morning in the eastern Alpine and Carveacre communities. He believes that residents “should not have to put up with Sunrise Powerlink helo [helicopter] construction operations seven days a week because SDG&E/SRPL/Sempra built a schedule that could not tolerate any temporary shutdown, such as safety stand downs,” nor because the companies’ contractors “refused to follow the precept of the mitigation document and report the tail rotor strikes.”

Those oversights resulted in the utility’s helicopters being grounded by the California Public Utilities Commission for several days. “We had a saying in the Marine Corps: `Lack of planning on your part does not precipitate a crisis on mine,’” concluded Russo.

Leann Carmichael at the County Department of Planning and Land Use said that if complaints were received, “We will be examining that.” She maintained that the County followed “typical procedures” for noise variances in granting the variance to SDG&E.

The variance justification states that “The additional work days are intended to minimize the net impact to the public. The Noise Variance would likely expedite completion of 43 towers in this calendar year, possibly avoiding the need to restart work in these areas in July 2012. If a restart is required in July 2012, the net impact to the public will likely be greater in order to ramp up construction activities to the same level at which they are currently operating.” The utility must cease operations during the winter to avoid golden eagle nesting season. Leaving lands bare without re-vegetation could also cause erosion, according to DPLU.

Michael Workman, director of communications for the County, confirmed that six complaints had been received officially as of yesterday.

Also yesterday, Jennifer Stone, spokesperson for Supervisor Jacob, confirmed that “Dianne expressed her concern to staff with the variance and her support for rescinding it.”

To file a noise complaint over this issue with the County, you may contact Count Noise Officer John Bennett at 858-694-2177.  However Workman indicates such complaints are kept confidential and will not be disclosed to media or the public.  To assure that your complaint will also be part of a public record, you may also register  a complaint to Supervisor Dianne Jacob's office.  Complaints may also be made to the Bureau of Land Management at 760-337-4424.