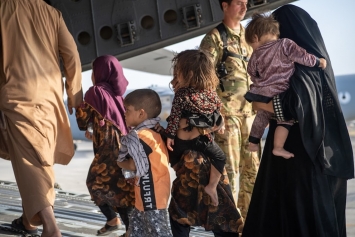 In an earlier interview with 10 News, Anderson said areas of his district including El Cajon and Spring Valley have had 38,000 refugees from the Middle East settle there in recent years including refugees from Iraq, Syria, Afghanistan and other nations.

Anderson has said he views it as a “moral obligation” to assist them – but also indicated he wants to avoid having local taxpayers fund the resettlements by having the federal government spend frozen Taliban assets. He has noted that in the past, the U.S. has used frozen assets of Cuba and Iran to resettle refugees from those regions.

An estimated 58,000 Afghan refugees are expected to arrive in the U.S. following the U.S. troop withdrawal that ended a 20-year war in Afghanistan which began after the 9/11 terrorist attacks.

California is expected to take in about 5,200 of those refugees—more than any other state, and around 1,300 are expected to arrive in San Diego by December, says Jill Galante, co-leader of Helping El Cajon Refugees, 10 News reports. Her organization has solicited donations of household goods from East County community members to help the new arrivals set up households when they arrive.

But aid agencies provide only short-term assistant for 90 days. There is a critical need for long term help, particularly to find permanent housing for refugee families in San Diego County, an area with high housing costs and a shortage of affordable housing.

Board Chairman Nathan Fletcher sided with Anderson after some residents testified against helping the refugees over safety concerns.

Fletcher noted that all Afghan refugees have been vetted by U.S. intelligence and law enforcement agencies, as well as U.S. Customs officials before they are admitted to the U.S.

“They love this country,” added Fletcher, a Marine Corps combat veteran. “If we’re a country that can’t keep our word to people who sacrificed for us, then shame on us.”

The Afghan Resettlement Task Force proposed by Supervisor Lawson-Remer aims to pull together resources from nonprofits, local governments and school districts, serving as a central clearinghouse.  Nadine Toppozada, the Director of Refugee and Immigrant Services in the San Diego region, say the ability to rely on a task force to provide support after short-term aid runs out “is crucial.”