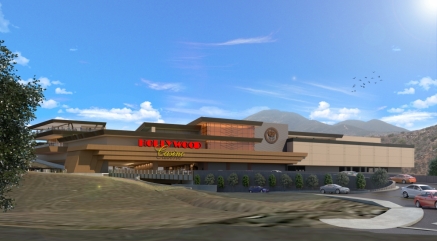 April 22, 2016 (Jamul) - The San Diego County Board of Supervisors has voted to approve a Memorandum of Understanding with the Jamul Indian Village of California.  The agreement will memorialize negotiations regarding the construction and operation of the tribes Hollywood Casino Jamul set to open this summer.  The agreement passed on a 3-1 vote, with Vice Chairwoman Dianne Jacob opposed and Supervisor Greg Cox absent.

The Jamul Indian Village (JIV) is one of 13 federally recognized Native American tribes that make up the Kumeyaay Nation in San Diego County.

The JIV entered into a gaming compact in 1999 with the State of California for a casino.   The gaming compact does not require an agreement with the County nor does it require a California Environmental Quality Act (CEQA) evaluation.  Building a casino on a reservation has its own state and federal rules.  The County of San Diego has limited jurisdiction.

If a private commercial project (like a shopping mall or stadium) were to be built in an unincorporated part of the County, the property owners would be required to bear the cost of mitigation, remediation, regulations, inspections and fees.   In addition the land in Jamul is zoned AG for agricultural so the owners/developers would need to get a variance to the zoning and general plan for the region.

However tribal leaders have indicated the JIV is committed to mitigate any and all significant adverse off-reservation environmental impacts.

Erica Pinto, Chairwoman of Jamul Indian Village stated, "We are grateful for the Supervisors' vote today and County staff’s work on the government-to-government negotiations during the past year."

A related Fire and Life Safety services agreement was penned between the JIV and the County in January of this year.  The JIV will provide $4.8 million in initial payments and equipment and over $2.75 million annually for fire, life safety and public safety services and includes two new fire trucks for East County and a 4x4 vehicle.

The Board of Supervisors meeting was filled to overflowing.   A majority were opposed to the agreement.  A major

concern of the residents was the impact to local traffic, congestion and safety especially around schools.

The County responded that the traffic engineers at Caltrans had already determined before the casino project that highway 94 would be widened between Jamacha Boulevard and Steel Canyon Road from two lanes to four.  Caltrans conducted a CEQA study and identified improvements to traffic safety and flow.  However the cost of these improvements is not part of the Memorandum because with monitoring traffic flow, further improvements may be made as needed.  The agreement would require future good faith negotiations regarding traffic and transportation.  Provisions were made for unanticipated future uses.

Approximately 14,000 trips are made daily on highway 94 each day and the casino would add 900 more cars on average each day.  “That is one sixteenth more traffic,” according to the County highway engineer.

In addition to the $20 million dollars JIV expects to pay for upgrades to the highway, the tribe will provide over $3.7 million dollars for roadway improvements not included in the California Department of Transportation’s Final Report.  The money will be used for new dedicated turn lanes and traffic signals along State Route 94 in Jamul and key intersection enhancements to improve safety and increase traffic flow.

BusinessWire reports that combined, the agreements will result in over $90 million dollars in funding for fire, life safety and public safety over the next 20 years.  JIV will also provide semi-annual and perpetual mitigation and operating reports to the County that include, among others: public safety, air and water quality impacts, and compliance with noise and dark sky ordinances.

The Jamul Indian Village worked diligently with the California Department of Transportation and San Diego County traffic engineers to improve roadways via direct funding by JIV, fair share contributions and/or Transportation Impact Fees. The effort is designed to mitigate traffic and improve the safety of SR 94 and ancillary roads for the community and future customers.

“It’s important because we are good neighbors,” Pinto said of the agreement. “Our mantra is public safety. The public is going to get so much from this and so are we.”

Opponents of the project say the casino does not belong in this rural tranquil community.

Dozens of Jamul residents spoke in opposition at the County Board meeting.  The Jamul-Dulzura Planning Group unanimously opposed the agreement and in a 15 minute presentation, offered that the agreement was weak, did not provide enough revenue for highway improvements and failed to wait for challenges in Court to be decided.  They claim JIV is not a tribe and do not have a reservation and therefore cannot build a casino.

Glenn Revelle the President of the Jamul Action committee reiterated the claims and said that if the County concludes an agreement with the tribe it will undercut the plaintiff’s case by recognizing the JIV as a legal tribe.   Chairman Ron Roberts asked the County Counsel to clarify if there was a dispute over whether or not JIV was a tribe.  "I think that is very fundamental here," he said.

The County’s Board of Supervisors Counsel said that they relied on the Department of the Interiors list of federally recognized tribes.   When questioned further he noted that there was no evidence to that they are not a federally recognized tribe and 14 lawsuits to stop the project had failed.   The Federal District Court in January rejected their claim however the decision is being appealed.

“I find myself in a difficult situation, to approve an agreement on a casino that I do not agree with,” Supervisor Diane Jacob said before the vote. “My opposition to this casino is well documented for 20 years. Nice building, wrong location.”

“It’s the single biggest eyesore in the community,” Jamul resident Connie Via said. “This is about greed and corruption. No casino in Jamul. Not now. Not ever.”

“I realize the folks don’t want a casino,” Supervisor Bill Horn said. “The fact is, there is going to be a casino. We don’t have jurisdiction over a sovereign nation. They don’t have to be here,” he said, indicating that the tribe volunteered to enter into a mitigation agreement with the County.

Supervisor Horn has four casinos in his district, Valley View, Rincon, Pala and Pauma.  "They have been an asset to the community.  Good neighbors and appreciated,” he said, adding, “We have heard these objections before."   Hollywood Casino Jamul-San Diego is projected to generate over 1,000 permanent jobs. More than 7,000 employment applications have been submitted in recent months, with approximately 3,000 applications coming from Jamul and surrounding communities.

"The community wants and needs the jobs our project is creating. We look forward to becoming an economic development engine in East County for years to come," said Chairwoman Pinto.

County staff reminded the board that the tribe was not bound to enter into the agreement and could go forth with the casino plan.

The tribal government had been negotiating with the county for more than two years to reach the agreement “because we are good neighbors,” Pinto said. “That speaks volumes about the people we are.”

The casino is expected to include a three-story gaming and entertainment facility of 200,000 square feet, featuring more than 1,700 slot machines, 50 live table games, restaurants, a Tony Gwynn sports bar and an enclosed below ground parking structure for 1,800 cars.

..semi United States of America, plus, a bunch of other little states / Nations inside? Absolute insanity!