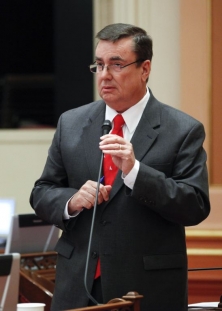 May 9, 2021 (San Diego) – San Diego County’s Board of Supervisors unanimously approved a measure to increase public notification regarding locations of registered sex offenders and proposed placements of sexually violent predators in communities. Supervisor Joel Anderson introduced the measure, which was amended at the request of Supervisor Jim Desmond to also include Native American communities.

Anderson says that existing notifications “do not provide adequate notice to communities where sex offenders will be located.” In a written statement to the board, Anderson indicated that after sending questions to the District Attorney and Sheriff regarding the placement process and notification procedures, “there are inconsistencies and omissions in the answers we received.”

He adds that sex offenders were found to be residing illegally in his second district, citing an example of a subcontracted who forged an agreement with a homeowner to house ten sex offenders in a living arrangement later found to be a violation of the County’s zoning ordinance, resulting in the offenders vacating the property.  “There is no way of preventing a similar situation from occurring in the future,” the statement adds.

Anderson has strenuously objected in recent public appearances to the disproportionate number of sexually violent predators placed in his district, while some other districts have none or very few.  He has contended that this is unfair to East County, a generally poorer area than some wealthy enclaves that have not had any predator placements.

Anderson’s action comes in response to protests held by residents objecting to proposed placement of two sexually violent predators at a home on Horizon Hills Drive in unincorporated El Cajon near Mt. Helix, a neighborhood with many children close to the site and a day care center across the street. Both  offenders have a history of violent sexual assaults on young people and both have been deemed likely to reoffend, yet inexplicably the state approved their conditional supervised release. Neighbors are awaiting court rulings on the placements.

The measure adopted by the board directs County Counsel and the Chief Administrative Officer to review questions raised along with facts and related issues, and to determine what processes and procedures could be used to improve notification of the public.

Anderson’s measure also asks the District Attorney to convene a meeting of the Sex Offender Management Council within two weeks; the Council has not met since before the COVID-19 pandemic. The Council is asked to appoint an executive director and fill several vacancies, as well as to identify which county agency or program should be designated to consult with the Calif. Dept. of State Hospitals during the process of seeking housing for sexually violent predators slated for release.

The Council must also come up with new notification procedures for the public to “protect the health and safety of community residents” potentially including advance notice of Supervisors, the District Attorney and other community leaders, and to come up with a process for community input.

His measure also calls for recommendations on any changes necessary to state law to improve public notification.

The issue of “dumping” sexual predators in East County is one that former Supervisor Dianne Jacob also vocally objected to in testimony before judges on several proposed predator placements in areas including Jacumba, Campo, and Boulevard.

During a community meeting in Jacumba this week, residents raised concerns over, among other issues, seeking a broader solution to the sexual predator issue to protect not only their community, but communities across the San Diego region. Told of passage of Anderson’s measure to increase notification to communities, one resident opined that a change in state law is needed, stating, “These people shouldn’t be released into any communities!”

if you look up Benedict Arnold would you find anderson's picture.
The reason we became a dumping ground was the 2006 initiative prop 83, also known as the "dump sex offenders in rural areas" law, a law that Anderson ran on to get into the State Assembly. Otherwise known as Jessica's law. You can look it up, yes my dear east county neighbors, Joel Anderson's 2006 campaign for state assembly was founded primarily on passing this sex offender dumping law! Dumping on his own voters. He even had the endorsement of the Runner family, the husband and wife team of pols from north of Los Angeles who sponsored the initiative. Now he wants to do something about it? Strenuously objecting? Maybe he should apologize to the people of east county for pimping this law in the first place? But I can't really make that case too strongly because you, my neighbors, voted in favor of prop 83 by over 70%. So whose fault is it, the politician who saw clearly you would vote against your own interests, or you the voters? I'm not surprised so many of you are willfully bad at history. It makes you look kind of stupid, and I think you know that.