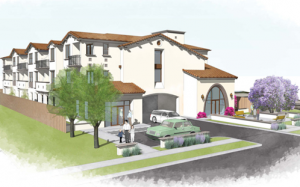 January 16, 2021 (San Diego’s East County) The San Diego County Board of Supervisors unanimously voted Tuesday to apply for $12 million in additional state funding for the No Place Like Home program.  No Place Like Home provides funding for the creation of affordable housing units for those with serious mental illness who are experiencing or are at-risk of homelessness.

Tuesday’s authorization also provides County behavioral health supportive services for tenants in No Place Like Home units for a period of 20 years.

So far, the County has approved six developments through the No Place Like Home program in in San Diego, the South Bay, and North County – but not East County, even though East County has a large homeless population in places like El Cajon, Spring Valley and Lakeside.The County has previously received some funding through the program and could ultimately qualify for up to $117 million through 2024.

We asked Scott Barnett (photo, right), Chief of Staff for East County’s newly elected Supervisor Joel Anderson, what else the Supervisor plans to do to help the homeless and those at risk of becoming homeless.

Barnett told ECM that Supervisor Anderson  (photo, left) “not only wants more funds, but he will be releasing a comprehensive plan which will focus on the homeless,” including those who are homeless because they lost jobs and can’t pay rent, as well as those who are mentally ill or have substance abuse issues.

According to Barnett, in Supervisor Anderson’s first eight days, the new supervisor has already met with around 10 county departments and homelessness activists. “We’re going to move quickly” he said, adding that Anderson plans to propose pilot programs that can be expanded if they work, or modified if improvements are needed.

Barnett added, “You will also see some specific initiatives for economic developments in the communities – not just lip service or talking points because there’s no time to waste, as Joel says. He has a very experienced policy staff working hard form day one. Homelessness and mental health issues are major policy priorities of his.”