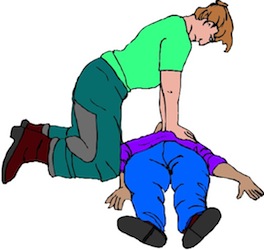 Medical treatment is best when administered three to five minutes after a heart attack, but emergency responders too often take longer to arrive. The County of San Diego considers response times of under 12 minutes to be acceptable, even though this is too late to save a person who has suffered a heart attack. The goal of this program is to have a trained and registered group of citizen volunteers to respond and administer aid in the interim to help save lives.

New technology allows for the use of advanced mobile applications to greatly expand the number of trained San Diegans available to quickly respond to cardiac-related incidents. Using location-based services built into smartphones, this technology will, in seconds, match the location of a victim with that of the nearest trained CPR provider, an individual who will then be notified by a smartphone message and provided a map showing both the victim’s reported location and closest Automated External Defibrillator (AED).

The U.S. pioneer in establishing these systems is the PulsePoint Foundation, founded from technology that emerged in California’s Silicon Valley and has since been incorporated within the structure of a specially-focused 501(c)3 non-profit. Since its 2011 founding, the PulsePoint system and smart phone app have been adopted throughout the United States to great success.

The potential introduction of the PulsePoint smartphone app for use throughout San Diego County has drawn the support of public safety, first response and emergency service providers, including CalFIRE, The American Red Cross San Diego/Imperial Counties Chapter, UC San Diego Medical Center and San Diego Gas & Electric. In addition, the city of San Diego Fire-Rescue Department is in discussions with PulsePoint, as is the North County Dispatch Joint Powers Authority.

By incorporating the PulsePoint app into the regional 9-1-1 emergency call system, the county will be empowering a new group of citizen first responders to help improve public safety and save lives.

Supervisors approved director the Chief Administrative Office to initiate talks with regional emergency response system operators and PulesPoint Foundation to establish a countywide smartphone CPR notification system o alert off-duty CPR-trained first responders. The CAO is also directed to identify grants and other funding sources to underwite start-up and initial operating costs. Funding was not included n the proposal adopted; estimated costs include $25,000 to $50,000 for implementation and another $5,000 to $7,000 for annual operations.