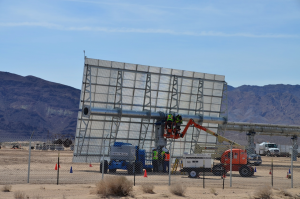 October 16, 2015 (Boulevard) – By a 4 to 1 vote with only Supervisor Dianne Jacob opposed, the Board of Supervisors this week approved a revised version of the controversial Rugged Acres industrial solar facility and rescinded approval of an earlier plan.

A judge had tossed out the original environmental impact review because massive battery storage facilities were added after public comment was closed.  Supervisors approved a revamped plan with the energy storage facility removed.

Supervisor Jacob stated, “I strongly support solar but I believe it belongs on rooftops of both single family homes and businesses and a solar farm in the right location,” Jacob said. “This project would potentially industrialize our back country which was never meant to be. The project can no longer live up to the promises and major use findings that are needed for approval.”

Soitec argued that the project could power up to 26,000 homes, helping offset loss of power from the San Onofre nuclear facility that shut down in 2012.

The project has drawn widespread opposition in Boulevard, where residents and hydrology experts have argued that the project poses a risk of wildfire and could drain groundwater during construction, negatively impacting wildlife habitat and well water for residents as well as scenic views at the gateway to a federal recreational preserve at McCain Valley and wilderness areas.

Just like Ocotillo and Jacumba Hot Springs, Boulevard is going to lose its appealing natural beauty and WILDlife because of industrialization. It is because of this politically-corrupt transformation that my husband and I no longer use the McCain Valley Recreation (formerly Conservation) Area and surrounding remote Wilderness Areas. We have bought property elsewhere in San Diego's back country for when we retire hoping that it's safe from this kind of abuse of our natural resources. Now there will always be a risk by anyone who purchases property in other back country areas when existing General and Community Plans cannot be relied upon because they can be overridden by using mandates as an excuse. I agree with Dianne Jacob's point of view that there are other more environmentally-sensitive ways to use solar as a renewable energy source. A new report just came out confirming the whole state of California is in the process of losing its precious natural resources and WILDlife to this kind of industrialization. Sad thing is, nothing can STOP IT!

With the exception of Dianne Jacob, San Diego County Supervisors seem determined to destroy our backcountry.