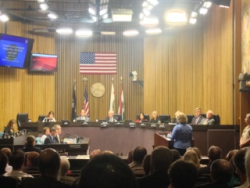 “We supported the renewable energy plan but we wanted it done in the right. The stakeholders advisory group is biased and stacked. It’s all industry…” – Donna Tisdale, Chair, Boulevard Planning Group

September 26, 2013 (San Diego)  – The County Board of Supervisors  voted 5-0  on Wednesday to approve a work plan for a comprehensive renewable energy plan. The plan includes options for creating an alternative to SDG&E such as a publicly owned utility district, as well as plans for the type, scale and location of energy development. A cost analysis and comparison of various energy options was removed, however.

The work plan will analyze ways in which the county can move forward with renewable energy options. It was approved unanimously after the Board heard public comments and deliberated for nearly two hours on Wednesday morning.  The plan drew support from the energy industry and concerns from rural residents.

“Today’s item is a road map, but we don’t know what the road map will look like,” said Second District Supervisor Dianne Jacob. “We need the research before we formulate or change any potential policies – this work plan will do that.”

Jacob said she felt strongly that it is important to do the homework “so we can make an informed decision later.”

One of the major concerns among the supervisors before approving the work plan was that the development of new plans or policies may negatively impact projects currently under review.

Supervisor Ron Roberts made sure that the Board was in agreement before supporting the work plan.

“What I suggest is that the rules in effect today are the rules people can rely on throughout this study,” Roberts said. “And we won’t retro-apply them.”

Roberts’ concern was one that was laid out in the work plan in this way: “In order to alleviate concerns and provide certainty to applicants, the Board may wish to ‘pipeline’ renewable energy projects currently under review and exempt them from any future policy changes or new requirements that may result from this REP development effort.”

Or as Board Chairman Greg Cox said, “the rules are the rules until they’re changed.”

Supervisor Jacob motioned to remove the parts of the work plan that called for a cost analysis of types of renewable energy and energy delivery models. That motion cuts $70,000 from phase one of the work plan, bringing the cost of the first phase down to $300,000. Phase two is estimated to cost $175,000.

Those in the renewable energy industry that spoke in support of the work plan had asked that the board remove the cost analysis portion of the plans.

“It’s not the county’s job to do economic planning,” said Patrick Brown, a permitting project manager at Soitec USA who spoke to the Board in favor of the work plan. “Leave that to the free market.”

Chris Brown, owner of Alchemy Consulting Group and a consultant to Soitec and other renewable energy companies, explained after the meeting why the industry was opposed to the county running cost analysis of renewable energy sources and delivery models.

“The concern was that the county was going to go through and review the economics of doing a particular project, whether it made money or not,” Brown said. “There is no other situation where the county does this. For instance, the county doesn’t go through and check the numbers of a homebuilder or a residential or commercial builder and say ‘you’re not making enough money here, or you’re making too much.’ Who is the county to say yay or nay? It concerned the industry.”

But Donna Tisdale, Chair of the Boulevard Planning Commission, said she was “disturbed” that the cost analysis was removed.  “If they really thought their projects were economically viable, why wouldn’t they want an economic analysis?”  she asked.

She believes that if the total costs of industrial scale projects were tallied up, alternatives such as rooftop solar would be more economically viable as well as safer for residents and the environment.

Others who spoke in favor of the work plan included Shawn Marshall, who helped co-found a Community Choice Aggregation energy model in northern California’s Marin County.

CCA’s are a major part of the research phase of the work plan and would provide an alternative energy source to SDG&E, the county’s sole energy provider. Besides Marin County, CCA’s are in extensive use in Illinois and Ohio.

According to Marshall’s presentation, if San Diego County were to pay the same rates that Marin County pays for CCA energy, residential users would save 6-percent and commercial users would save 23-percent compared to SDG&E’s current rates, which are expected to rise.

The Sierra Club of San Diego also sent a representative to voice its support of the work plan.

Those who opposed the work plan were residents of East County who say that renewable energy projects in the mountains and desert will harm their health and be eyesores to the residents of those communities.

“You’re going to kill us, and don’t say that you won’t,” said Theodore Tibbits.  Soitec Solar’s 420-acre project aims to put 1200-square foot solar modules just 100 feet from his front door.   He voiced concerns over the well being of himself and his wife, since the panels radiate heat, glare, and electromagnetic radiation. Wind turbines are also proposed in his community.

“What you’re doing here is wrong; you’re endangering our lives, not to mention our property value,” Tibbits said. “It’s too close; it’s way too close. Please, have a little mercy.”

Descanso resident Sandra Wilson agreed with Tibbits that renewable energy is good, but only if done without placing solar farms on ranch land.

“Our communities are resources to San Diego,” Wilson said, adding that mountain and desert communities attract tourists and house important water sheds. “What is scenic about solar farms?”

Bob Maupin, whose property also abuts the Soitec project, testified that his wife has a rare form of cancer that started shortly after Southwest Powerlink, a high voltage power line, was built through their property which was seized via eminent domain in the 1980s.  He, too, is concerned about electromagnetic fields from yet more energy projects.

Tisdale called for the Supervisors to protect the backcountry.

“We are beyond tired of being on the losing end and being called economic terrorists,” Tisdale said. “Renewable energy planning is good, if done right. But we would like certainty, too. We would like where we live to be protected. The backcountry has value, but it is under attack, under assault. We need help from our county leaders.”

Tisdale told ECM after the vote, “We supported the renewable energy plan but we wanted it done in the right.  The stakeholders advisory group is biased and stacked. It’s all industry and includes the East County Renewable Energy Coalition,” she said, noting that the group is currently comprised only of energy industry representatives with no representation for residents, environmentalists, or tribes that have voiced concerns over sacred sites.

Supervisor Jacob, as the representative of Boulevard and the surrounding communities in District 2, told those who opposed the work plan that she understands their concern, but reiterated that this is only a plan to gather more information.

“Thank you to those who came from Boulevard,” Jacobs said. “But it needs to be emphasized that we’re looking at a plan.”

Steve Schmidt, an aide to Jacob, later noted that "county staff will be consulting with the relevant community planning groups as the plan evolves, such as Donna Tisdale’s group in Boulevard. As you know, Dianne values those citizen advisory panels and appreciates their input."

As for the work plan itself it is a two-phase plan that will take 30 months to complete.

Phase one will develop a meaningful renewable energy plan based on research and analysis. It includes coordinating with the county’s Energy and Sustainability team to analyze the county’s existing renewable energy programs and making them more efficient; consulting private-sector stakeholders; conducting economic, feasibility and best management practices research; considering findings and recommendations through internal and external stakeholder participation; forming an 8-10 member Renewable Energy Advisory Committee comprised of stakeholders interested and/or involved in the promotion of renewable energy.

Phase two, as laid out in the work plan, “consists of developing the recommendations approved by the Board at the completion of phase one and completing any associated environmental analysis prior to their formal adoption. The specifics of phase two will remain unknown until all phase one research and analysis has been completed and its associated recommendations have been identified and reviewed by the Board. The phase two work plan will be developed as an action item under phase one and presented to the Board with the phase one comprehensive report.”