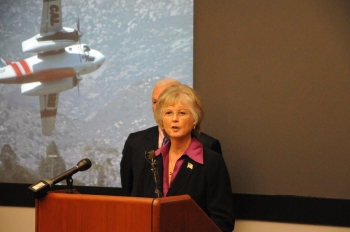 The Board learned that the Federal Aviation Administration has targeted the Ramona Air Traffic Control Tower for closure as as early as April 7. This means, according to Cal Fire Battalion Chief Ray Cheney, that the airport would revert back to an “uncontrolled airport, where pilots have to avoid each other and announce their intentions.”

This was the way it was back on June 21, 1995 when there was a midair collision between a United States Forest Service Beechcraft and an NTSB air tanker, leading to the deaths of the air tanker crew. An open space, instead of a controlled space, will increase the risk of mid-air collisions, since a “controlled airport controls the air traffic sequencing.”

According to Supervisor Jacob, “The closure of the Ramona Air Traffic Control Tower is a disaster waiting to happen.” Moreover, the full Board of Supervisors voted this morning to oppose the closure. “This tower is essential to keep the public safe.”

The airport was central to the Air Attack component during the 2003 and 2007 fires, and on average it responds to 450 plus emergencies a year and  protects 1.7 acres, including many that are federal land.

“The federal government has budget problems but this is using a hatchet instead of a scalpel,” said Jacob, who represents East County.

Supervisor Ron Roberts stated, “It is incredible that we were notified last week. We are here to protect the public and prevent the Ramona Air Traffic Control Tower from closing with sequestration.”  The Ramona Airport’s location is perfect for fighting fires, and it also serves as a control point for student pilots and military aircraft.

He added that the County leads the nation in cutting edge command and control technology for firefighting, including the Operational Downlink Information Network (ODIN), which increases situational awareness for incident commanders. This allows Cal Fire to map the progress of a fire in less than an hour, instead of the twenty four hours lag time it used to take. This system is flown by one of the aircraft flying out of Ramona. This adds to extremely good command and control capabilities that ultimately save lives.

Ramona also has tanks for the retardant that air tankers will drop, and serve as a refueling station. He also said that it was essential for the County to keep the tower manned since Ramona is key to firefighting in the County. The tower would be unmanned just as the fire season is starting to get going.

Chula Vista Fire Chief Dave Hanneman, also the President of the San Diego County Fire Chief Association, emphasized that the Ramona Airport helps in wildland firefighting, which is the greatest threat in the County. “Many of the deep canyons in the County are not accessible to ground troops. Having an aggressive air attack stance helps to fight fires that otherwise would be very difficult terrain.”

ECM asked about the possible degradation of the response capabilities due to an open space airport. Cheney said that he did not expect to see any degradation in these capabilities. ECM also asked about having firefighters man the tower. They are not trained for this, or certified, explained. While Cal Fire uses ground controllers, helping with traffic on the tarmac, as well as in the front lines, they simply do not have the personnel who could be certified to man the tower.

Cheney emphasized that having the air operations base close to the action will also mean more flights into the fire zone, helping to control and ultimately put out those fires faster.

According to Jacob this tower costs about half a million dollars to run a year. She wants the federal government “to acknowledge the will of the Board of Supervisors and not close the tower.”