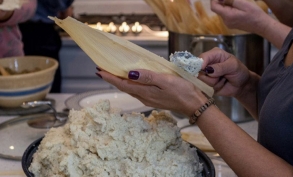 September 15, 2021 (San Diego) -- The County Board of Supervisors voted today to move forward with plans to legalize microenterprise home kitchen operations, or MEHKOs. MEHKOs are defined by California law as a small retail food facility, operated from a private home.

East County’s Supervisor Joel Anderson and Vice Chair Nora Vargas introduced the measure. According to Anderson, seven other California counties or cities have authorized MEHKOs and had “tremendous success” though the models vary slightly.  The state allowed local jurisdictions to begin authorizing MEHKOs in 2018.

The ordinance would legalize local home kitchens that prepare, sell and serve up to 30 meals per day, or 60 meals per week. MEHKO operators would be allowed to earn a maximum annual revenue of $50,000.

MEHKO menus would be restricted to items that can be prepared and sold the same day and would exclude items that contain raw milk or raw shellfish. Meals could be served in the home, picked up by the customer, or delivered by the MEHKO operator.

The ordinance would create economic opportunities for small-scale, home-cooking operations, which are primarily operated by women, immigrants, and people of color. It would also legalize food businesses that have been making and selling food from home illegally.

KPBS reports that Cook Alliance estimates that 50,000 to 100,000 home cooks are now selling food illegally from home kitchens. Offering a legally pathway makes it easier to regulate these operations to assure safety for consumers.

“At the end of the day we’re taking people that would normally operate in the gray. We’re giving them a path to operate legally and lift their community,” Anderson says.

A home-based kitchen under the MEHKOs rules would be limited to serving 60 meals a week, to avoid competing with restaurants.

County staff now have 120 days to return to the board with a draft of the ordinance.

Since Supervisors voted on it, it's political, but it also provides oportunities for new businesses.

How do you view it as "invasion of privacy" for the county to want to be sure food sold to the public is safe?  Without inspections there could be roaches, rats, pet hair, or other unsanitary conditions not to mention unsafe storage that could lead to food poisoning.  This ordinance makes it legal for small home kitchens to sell food, as long as they meet public health standards.

So these people were happily operating homes businesses and not being harassed financially or being Covided to death and that was”operating in the gray”? Where do you find writers who can spin an invasion of privacy into something positive? And why is this politics? Shouldn’t it be in Business or even Community?