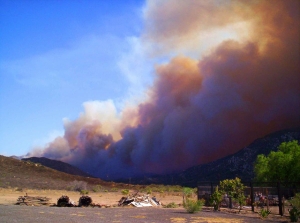 January 24, 2011 (San Diego) -- The County Board of Supervisors will decide tomorrow whether to merge five fire agencies into the San Diego County Fire Authority. A hearing is set for Tuesday, January 25, at 9:30 in the Board Chamber at the County Administration Center, 1600 Pacific Highway in downtown San Diego.

The County Fire Authority was created in 2008 when the County united a handful of rural fire agencies with a goal of creating a stronger, more efficient agency that will  eventually serve over half of the geographic area in our region, including unincorporated areas throughout San Diego's East County, where the devastating wildfires in 2003 and 2007 began.

Supervisor Dianne Jacob spearheaded the effort to consolidate rural fire agencies after the 2003 Cedar Fire exposed serious flaws within the region’s system of fire protection. A landmark deployment study presented to the Board of Supervisors last year recommended continued consolidation of fire districts and, eventually, a regional Joint Powers Authority.