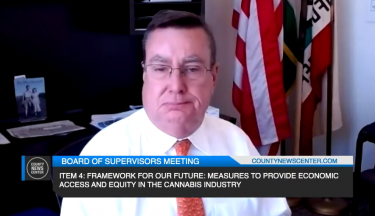 January 28, 2021(San Diego) – San Diego County Supervisors yesterday voted 4-1 to have staff bring back a plan within 90 days for reform the County’s policies on marijuana (cannabis), after obtaining input from community planners and other stakeholders.

The plan would create a framework to legalize and regulate sales, manufacturing and farming of cannabis whlie creating jobs in unincorporated areas, also beefing up code compliance to shut down illegal operations. Supervisors are expected to vote on the new regulations by July 1.The proposal was brought forward by Supervisors Nathan Fletcher and Nora Vargas.

Newly elected Supervisor Joel Anderson, aware that the measure had a clear majority for passage, successfully added an amendment to provide $500,000 for aggressive enforcement to shut down illegal pot shops, labs or other unlicensed marijuana facilities – starting immediately, even before any new regulations are adopted.

“I’ve heard the community’s concerns regarding illegal pot shops, and I agree that aggressive enforcement must be implemented,” Anderson stated in a press release. “Today’s Board action is just a framework of what our cannabis ordinances should do, and I am working to ensure that any changes include full transparency and community input.” Anderson also pushed to assure that community planning groups would have an opportunity to weigh in and amended the original resolution expand buffer zones around sensitive uses such as schools, parks, churches and daycare centers.

The proposal also includes a social equity component intended to help communities impacted negatively by the War on Drugs apply for permits, and seeks to create good-paying jobs through labor peace agreements in businesses with 10 or more workers.

Currently, all cannabis businesses are illegal in the county, except for a handful of dispensaries grandfathered in for several years after the prior board legalized sales, then again outlawed such operations.

But while cities such as La Mesa, Lemon Grove and San Diego have provided legal licensing of dispensaries after statewide voters approved legal use of both medical and recreational cannabis, prohibition has resulted in a flourishing black market in the unincorporated areas. Illegal operators have overloaded wiring, caused fires and explosions, led to increased crime, access by minors, and in some cases, sold dangerous adulterated products and narcotics.

“Unsafe products are being sold in unincorporated areas,” Fletcher said at the hearing. “We want to clean this up and have a good system in place.”

Licensing has largely eliminated such problems, since the state requires testing and inspection of products, strict ID rules for customers are enforced, and video cameras are monitored by law enforcement.  However when taxes have gone too high in some areas, illegal shops have again popped up, showing a fine line needed in a regulatory framework.

Vargas noted that cannabis taxes have the potential to help the county makeup for revenues lost due to the COVID-19 pandemic.

The County received 157 emails on the issue (item 4 on the agenda). Many spoke both for and against the measure.

One speaker suggested a buffer zone of 1,000 feet away from non-defensible wildfire areas; another voiced concern over impacts of growers on well water in rural areas.

Lincoln Fish, operator of OUTCO, one of the county’s few legal dispensaries near Gillespie Field in unincorporated El Cajon, stated, “Expanding a legal program is the only way to stop the illegal” operators…Help us take a sensible approach.” ECM has previously toured his facility, which includes organic growing without chemicals, strict adherence to regulations and security cameras to deter crime.

The owner of Jack’s in Ramona, another legal dispensary, said there is “strict ID of customers” to assure only adults can purchase. “Track and trace systems mandated by the state track every single gram from seed to harvest to processing to products…We are OSHA compliant.” He said they have a good working relationship with the Sheriff and urged a yes vote.

Brian Buxley, a disabled veteran and grower,, said his business has been involved with medical testing of cannabis on post-traumatic stress syndrome (PTSD) but had to set up operations outside San Diego to do so. A woman veteran also spoke, stating that cannabis has helped her PTSD.

Betty Rex, a mother and youth mentor, voiced dismay at the proposal and denounced plans to legalize what she called “an addictive and predatory drug during a worldwide recession.” She contended that edibles with high THC levels could entice kids to try the product, though sales to minors would be prohibited as with alcohol and tobacco products.

A man said his mother and two other relatives with cancer all used cannabis with he called a “miracle plant.” He added that money should come back to communities. “Thousands of black and brown folks like myself need a hand up, not a handout.”

One controversial issue is whether or not to allow people convicted of past marijuana violations to own or work in legal cannabis businesses. The proposal as written would allow this, but both Anderson and Desmond opposed this.

Rudy Reyes, the worst burned victim of the Cedar fire, said, “I turned to cannabis because I was ODing on morphine…We must find a way to make this work.”

A spokesman from the San Diego Marijuana Prevention Initiative opposed the measure, citing an increase in calls to poison control centers and emergency rooms after passage of Prop 64.  “If approved, you should dramatically increase resources for prevention and treatment,” he added.

Another speaker cited an Institute of Medicine finding that opiate overdoses decreased up to 35% after cannabis sales were legalized. “The opiate crisis has tripled here,” she added.

Jean Duffy of Julian contended this would “corrupt our way of life” and “put high drivers on the roads,” referencing another controversial provision that would allow tasting or sampling of products onsite.

Hannah Gbeh, executive director of the San Diego Farm Bureau, said the Bureau supports the measure so that farmers here can “remain competitive in the agricultural market.”

A San Pasqual tribal member said, “Let science speak. It’s not a gateway drug.”  He indicated cannabis has helped his brother, who has a rare neurological disease. “He can only take the edible form…I have to drive three cities away to get safe, regulated medical cannabis.” He urge the county to pass the measure and to “honor tribal sovereignty” and “include tribal voices” in San Diego’s 19 Native American nations.”Retailers cannot deliver to addresses on tribal land…this provides no safe way to get cannabis delivered.”

Fletcher noted that according to the Journal of American Medicine, based on U.S. Centers for Disease Control data, cannabis use in teens goes down after establishment of a regulated and legal framework in a jurisdiction. He indicated that The Santa Maria Times reported that Santa Barbara’s cannabis taxes have been able to “completely pay for enforcement and [budget] shortfalls of COVID-19’s impacts” and more.

Fletched motioned to approve the motion, which was seconded by Vargas. A discussion ensued.

Anderson cited concerns by his constituents over illegal pot shops. “Here in Lakeside we had a popup by a school; it was brazen…We really need to prioritize enforcement.” He proposed adding a half million dollars for the Sheriff to immediately begin enforcement to shut down illegal operators.  After discussion, that wording was amended to also include the option to fund crackdowns by county code enforcement.  The amendment was adopted unanimously.

Anderson also voiced concern to make sure organized crime couldn’t move in given tha these are cash businesses. Another amendment allowed staff to expand from 600 to 1,000 feet the distance between cannabis businesses and sensitive site such as schools and churches.

Desmond noted that cannabis remains illegal under federal law and said he wished it could be dispensed at pharmacies for medicinal purposes.

“I’m very surprised this would allow for THC vaping cartridges,” Desmond added, “The very things used to shut down vaping stores…I see this as contradictory.” He also objected to flavored edibles and voiced concern over potential attraction to minors.

Fletcher chided Desmond for hypocrisy on this stance, recalling a prior vote related to vaping/tobacco regulation.  “Remember in 2020, when you lectured us that adults over 21 get to make their own decisions?”

The proposal then passed 4-1, with Desmond opposed.