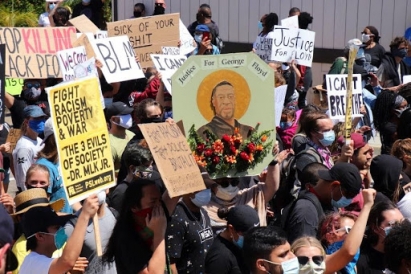 Photo, left, by Henri Migala:  protest in La Mesa on May 30 called for justice for George Floyd

The measure has passed the House of Representatives and is now awaiting action in the U.S. Senate. The legislation comes after a wave of high-profile killings of unarmed black individuals by police, most prominently George Floyd, whose death led to a murder conviction for Minneapolis police officer Derek Chauvin.

“Supporting the George Floyd Justice in Policing Act is the right thing for our country to do,” said Supervisor Fletcher, adding that the board declared racism a public health crisis earlier this year.

But Supervisor Desmond said that while he backs improving accountability for police officers and transparency, he is concerned that reducing immunity for police could result in more lawsuits, costing taxpayers money.

About a dozen speakers spoke in favor of the measure at the Supervisors’ meeting Tuesday. 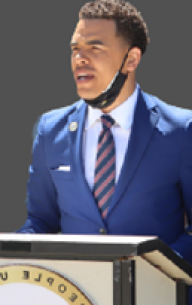 Civil rights leader Shane Harris (photo, right), president of the People’s Association of Justice Advocates, applauded Supervisors for  going on record to support federal police reform legislation that would address “many of the longstanding inequities Black Americans and other minorities have faced with bad policing in our country.” Harris calls for actions from the local to federal levels to address “the longstanding epidemic of bad policing.”

He concludes, “Bad policing will continue to cost taxpayers and lives if we don't address the policing culture and this federal legislation would change some foundational parts of policing and create more accountability and transparency. Today San Diego took a step in the right direction of history."

supports the racist Jim Desmond and Joel Anderson should be ashamed of themselves.