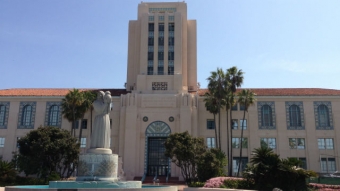 But Supervisors’ action comes too late for the filing deadline to actually join the lawsuit. Instead, the County attorney will draft an amicus brief voicing support for the case, but that can only be filed after the trial court issues a decision—and then only if the losing party files an appeal to a higher court.

The sanctuary state law limits cooperation between local law enforcement and federal immigration officials. But Sheriff Bill Gore, in a recent interview with East County Magazine, said he met with Governor Jerry Brown to hammer out amendments to the law, which he said gives him ample authority now to turn over undocumented immigrants to federal immigration authorities if they committed any of 800 serious crimes.

The Sheriff added that law enforcement officials around the state do not support forcing officers to act as immigration enforcement agents, for fear that this would frighten immigrants into not reporting crimes when they are witnesses or victims.

Supervisor Dianne, who voted for supporting the challenge to the sanctuary state law, she has seen many changes along the international border.  “

But Times of San Diego reports that Jacob later clarified she had heard of only one person on a terrorist watch list crossing the border illegally, and was unable to provide details on that case or who provided the information to her.

Supervisors Kristine Gaspar and Bill Horn also voted to join the challenge against the sanctuary state law.  Supervisor Ron Roberts was absent, but reportedly said he believed his colleagues should stay out of the matter.

Supervisor Greg Cox cast the only vote against the action. Cox said the Supervisors’ action “will create fear and divisiveness in our region, waste taxpayer funds and create distrust of law enforcement and local government within many communities.”  He added that Congress should pass bipartisan immigration reform, something that legislators in Washington have failed to do.

But Congressman Duncan Hunter (R-Alpine) issued a statement praising Supervisors’ decision. He said, “In standing up against the irresponsible actions by the State of California, our county supervisors who supported this action clearly demonstrated that their priorities are protecting those of us in San Diego County and not about politics.”

At Tuesday’s meeting, opponents of joining the action against the sanctuary state law far outnumbered supporters by a 62 to 17 margin.  Gaspar told media, however, that letters received by Supervisors were the opposite, with supporters of the suit outnumbering opponents.

Janet Farrell with the San Diego Psychological Association said threat of deportation causes negative mental health on immigrants and their families.  “Deportation causes the breakup of families,” she added, noting that sanctuary laws help immigrants who have not committed violent crimes by protecting them from deportation without compromising public safety.

San Diego County is the largest jurisdiction to come out in support of the Trump administration challenge to California’s sanctuary state law, joining Orange County, the city of Escondido, Mission Viejas and Aliso Viejo in taking an anti-sanctuary stance.

The court process can be slow, and it is unclear whether a trial court will hear and render a decision on the Trump lawsuit before January, when Supervisors Ron Roberts and Bill Horn will leave office due to term limits.  Supervisor Kristin Gaspar could also be off the board, if she is successful in her  race to fill the vacancy left by Rep. Darrell Issa retiring in the 49th  Congressional district.

So, it is possible that newly elected Supervisors could take a different view and vote to reverse the county’s support for challenging the sanctuary state law, before the measure is heard by an appellate court—if an appeal is filed in the future.

The more San Diego becomes a sanctuary city, which according to the track record of the state as whole, new construction ceases and the wealth of the residents of San Diego residents moves to the outskirts of the city and eventually out of California as whole.

The 7th Circuit Court of Appeals in my hometown of Chicago just dealt a major blow to Jeff Sessions, which also has ramifications in San Diego. See attached decision here.