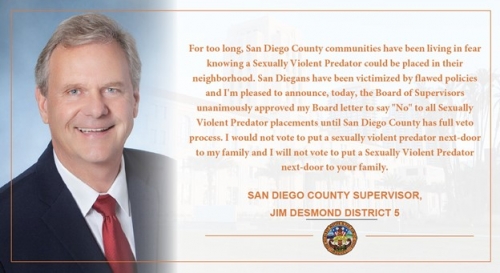 October 8, 2021 (San Diego) – By a unanimous vote, San Diego County Supervisors adopted a proposal by Supervisor Jim Desmond to oppose all future placements of sexually violent predators in the county until state law is changed to allow participation by local governments – including veto power.

It is unclear, however, whether the state will honor the Supervisor’s action, since placement power ultimately rests with the Department of State Hospitals.

“What people don’t understand is we have no legal power,” Supervisor Joel Anderson stated during the hearing Tuesday, where 22 people spoke in favor of the proposal. San Diego currently has five sexually violent predators placed in local communities – including some in Anderson’s East County district. Anderson observes that the state often places predators “in poor, low-income neighborhoods where people have the least ability to fight and push back.”

Recent placements have included low-income communities such as Campo and Jacumba.

But recently, neighborhoods have mobilized to block placement of sexually violent predators in communities with children and others at risk.

Badger was later proposed for placement in Rancho Bernardo, where an outcry from residents led the property owner to withdraw his property from consideration, an action approved by a judge. The homeowner is also seeking to break his agreement with Liberty Healthcare, the company the state contracts with to place sexual predators, for any future proposed releases.

“Thank you to all who stood up and spoke for change,” Hedberg posted on Facebook after Supervisors voted to oppose future placements until changes are made.

Among the most compelling testimony was that of Mary Taylor, who spoke of being sexually assaulted more than 30 years ago by Alvin Quarles. Dubbed the “Bolder than Most Rapist” by authorities, Quarles was proposed for release locally but his conditional release from a state hospital approved by a court was later overturned by an appellate judge.

Joel Anderson was practically a single issue candidate when he first ran for the Assembly on passing prop 83, with the support of George and Sharon Runner, the sponsors of the bill. He is a big part of the reason “we have no legal power.” But don't be too hard on Joel for knowing very well that 15 years is a very, very long time to remember any such thing for your average east county Republican. It is actually kind of funny to watch you do it to yourselves.