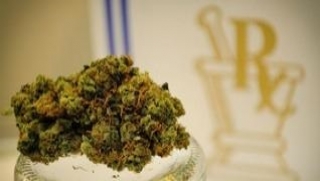 The move came after the Ramona Community Planning Group sent a letter to Supervisors asking for a ban or changes to regulations.  Ramona currently has one of the only two dispensaries in the unincorporated areas; the second is in unincorporated El Cajon near Gillespie Field.

The County’s Planning and Development Services department has issued building permits for four more, including two in Ramona, one in rural El Cajon and another in Valley Center.  Four additional applications are pending including two in Lakeside and one each in Ramona and Julian. The moratorium would put the brakes on all of those projects.

Supervisors heard testimony from over two dozen people who support the ban and seven opposed. Opponents voiced concerns about traffic on winding rural roads by potentially impaired drivers, as well as potential access to minors A representative from Drug Free Julian also brought a petition with 400 signatures of people against dispensaries.

Supporters cited a need for convenient access to medical marijuana for patients in rural areas, where public transit is largely lacking and winter weather can make it difficult to travel long distances to fill their prescriptions.

Supervisor Dianne Jacob, who represents East County, said she supports a longer term ban, noting that in addition to the two legal dispensaries already open in the county, the City of San Diego has seven dispensaries open and six more approved.  She also motioned for staff to craft zoning changes to require major use permits for dispensaries, a costly process, as well as a 1,000 foot buffer zone from residential properties and tough penalties for violations.

Supervisor Horn agreed with Jacob in supporting a permanent ban on new dispensaries.  Supervisors Greg Cox and Dave Roberts, however, indicated that while they support a temporary moratorium to allow staff time to fine-tune regulations, they do not support a ban.  Both said however that they believe each community should have only one dispensaries, not multiple outlets.

The moratorium, which expires in late April, could be extended for another 10 months and after that, up to an additional year, the Ramona Sentinel reports.