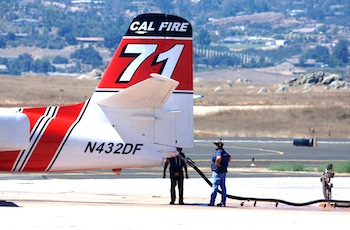 September 30, 2013 (Ramona) – With the federal government nearing a shutdown, Supervisor Dianne Jacob and Supervisor Ron Roberts have issued a press statement emphasizing the importance of keeping the Ramona Airport traffic control tower open. The Federal Aviation Administration earlier this year targeted the facility – a hub of aerial firefighting operations -- for closure due to sequestration, but extended the funding to October 1.  In recent weeks, the FAA has not publicly disclosed its plans for the tower and the looming shutdown is heightening worries about the facility’s future.

“The chaos and petty squabbling over the federal budget has left us in the dark about the status of the Ramona air-traffic control tower just when we need it the most,” Supervisor Jacob said. “With the most dangerous stretch of the wildfire season bearing down on us, it’s simply unacceptable that Washington, D.C., would allow the closure of a facility that is central to our aerial firefighting efforts and public safety. Within the past six months, Cal Fire aircraft based at Ramona Airport have conducted roughly 1,000 flights and dropped more than 575,000 gallons of retardant on backcountry fires. If the facility closes, those operations could continue, but without the critical safety net of air tower coordination.”

Supervisor Roberts concurred. “The federal government’s dysfunction includes some potentially dangerous amnesia about why the Ramona Airport has a manned control tower. A 1995 aerial collision between a U.S. Forest Service spotter plane and tanker actively fighting a fire killed three people and spread havoc upon those below, including the destruction of two homes,” he noted. “Ramona is the hub for fighting wildfires in our region, which includes plentiful federal lands, and the FAA needs to keep its control tower open and not jeopardize safety to make a political budgetary point.”