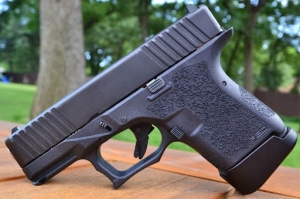 Photo via County of San Diego

Do-it-yourself ghost guns are homemade and untraceable, due to a lack of serial numbers. Thus they can evade federal and state requirements, such as background checks required to purchase firearms.

The ordinance also requires that all guns in homes be stored in a locked container or disabled with a trigger lock.

Supervisors Joel Anderson and Desmond voted against the ordinance. Desmond noted that California already prohibits guns without serial numbers and that parts to build a gun are easily found online. He stated, “I do think ghost guns are bad, but I don’t think this ordinance is going to do anything to keep the bad guys from getting them.”

The new law goes farther than state law, however, in banning not only ghost guns, but parts to assembly them.

Board Chair Nathan Fletcher expanded on a suggestion by Supervisor Jim Desmond to collect data on gun violence in an annual report.

Anderson said after the session that he  "does not believe that the ghost gun ordinance will have a positive impact on crime, nor make our communities any safer."

Chairman Nathan Fletcher issued a statement which reads, ““Enacting stronger safety measures for gun storage and reducing the possibility for more unregulated firearms to be distributed in our neighborhoods is another important step toward fulfilling our obligation to help protect San Diegans from unnecessary gun violence.”

According to stats compiled to Everytown for Gun Safety and reported by Newsweek, a review of 114 federal cases found that ghost guns were used in at least 2,513 crimes – and 40% of those criminals were prohibited from owning guns. It found ghost guns being utilized by criminal gangs for crimes including gun and drug trafficking, robbery, terrorism and murder. Online videos provide instructions to assemble weapons including semi-automatic firearms.

In 2019, the Bureau of Alcohol, Tobacco and Firearms reported recovering 10,000 ghost guns. In California, 30 of guns seized were untraceable ghost guns,

If a second reading of the ordinance is approved on January 25, the new law would take effect in February 2022, but several sections of the ordinance may not be immediately enforced to allow time for people with existing items to dispose of those guns and parts.