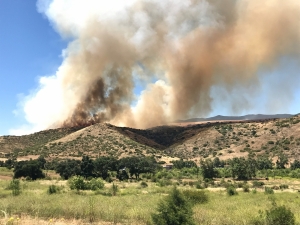 Photo: Gate Fire started by target shooters in 2017 near Dulzura

The ordinance also formalizes an agreement with the federal government to allow the county to issue the ban on federal land, with federal Bureau of Land Management (BLM) officers to enforce the county ban. A key issue lies in enforcement, however, since in the past residents have complained of inadequate BLM enforcement of laws even on existing federal properties.

The sites are located along and directly south of State Route 94/Campo Road and along and to the west of Marron Valley Road, near Donohoe Mountain, according to the agenda, which states, “This closure would reduce the year-round threat of wildfire and increase public safety in the area.”

Some residents have long called for a ban due to numerous fires caused by target shooting in the Dulzura area on public lands including federal Bureau of Land Management and County-controlled sites, but others have fought against restricting shooting.

Calls for outlawing target shooting in the area accelerated after the Gate Fire, which charred 2,000 acres in 2007 and was sparked by target shooters near Donohoe Mountain, as video revealed.

At a contentious meeting of the Jamul-Dulzura Planning Group in June 2017, residents argued passionately on both sides of the issue.  Those favoring limits on shooting cited fears of losing homes to fire or having evacuation routes dropped.

Those against a ban noted that most other outdoor shooting areas in East County have already been shut down, leaving few places left for activities such as youth firearms safety training as well as recreational target shooting. Some said they offered to help with weed abatement but their offer was ignored.

A dozen citizens spoke to Supervisors on Tuesday, with nine opposed to the ordinance.

The board is set to meet again November 13th for final adoption of the ordinance.

View our prior coverage: